Back in Service Again!

Hello everyone! We are back with cell service again.  We are staying in Wasila tonight, about 40 miles north of Anchorage, and the home of Sarah Palin...not sure if that is amusing to anyone, but I thought I would throw a little Wasila fun fact in here. Wow, what a time we have been having since I last wrote on here. Here we go...

Joe & Jan took Laurie and I out to dinner for our Anniversary. We went to a great Greek-Italian restaurant and had a really good time. We got to see a black bear eating some flowers along the side of the road too. Last Friday (the 24th) the motorhome decided to act up a little. The brake master cylinder started leaking, the batteries weren't charging and there was something else, but I forget right now.  I made due with everything until mid-week last week when we got it all fixed. Other than that, we haven't had any problems at all. Right near the airport in Anchorage, there is a lake with many seaplanes on it. Laurie and I sat and watched the planes for a while before picking Keith and Mary at the airport last Friday. We loaded up and drove South to the Kenai Peninsula, towards Seward.  We camped at a pulloff by a river and as soon as we stopped, everyone walked down to the river and across the river, on the mountain, there were 3 brown bears playing on some snow.  I took some pictures but since they were so far away, you have to zoom in on them. You can see the hump on their backs which tells us they were brown bears.  I also looked through the binoculars and saw them up close. That was our first brown bear (grizzly) sighting, so we were all excited. What was even cooler, was, Keith and Mary got to see them on their first night here!

The next morning, we drove into Hope. On the way there, we saw 2 bicyclist holding a black lab along side of the road. We drove by them at first, but then turned around because we figured they needed help.  They found the lab running along the road and didn't know what to do with it. I told them that we would take her into Hope and see if we could located her owner.  Her tag had a phone number on it, so I called and left a message for her owner.  After running into some local dog lovers in Hope (the town is tiny...it shouldn't even be called a town because it is so small) that said they would hold the dog until the owner called, the owner ended up calling me back.  She was in Washington and her husband was in charge of the dog, and he was camping down the road. We left the dog with some nice people in town and drove out of town and stopped by the husband's campsite. We told him that we left his dog with some ladies in Hope and he didn't really care...but we did our good deed, so score points for us! We drove into Seward after loading up and feeling good about the good deed we just did.  We stopped by the Portage glacier and walked up to it.  It was massive!  We saw a few monks up there and they were using digital cameras. Are they allowed to do that?  They aren't Amish, so I guess they are. 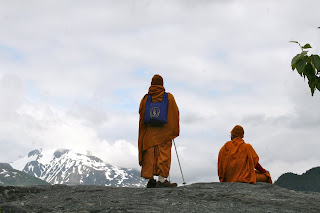 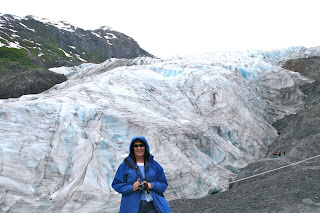 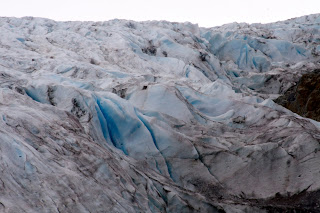 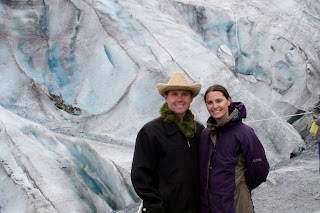 After hiking to the glacier and back, we drove to the municipal campground in Seward and found a great campsite with a view of the bay. Of course, we were with about 100 other campers, but it was still nice anyways. We walked into town and saw some fresh catch from that day's charter fishing boat. We had a good dinner that night and played a few games of catchphrase, then called it a night.  I'm going to upload this for tonight, then write more tomorrow.  I have a whole week to catch up on here and it is getting late, so I'm going to go to bed. Good night! 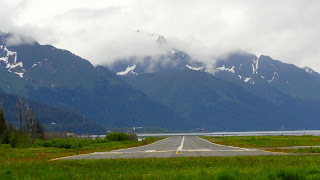 Posted by Pete Stephens at 4:11 AM