Good morning! Laurie's still sleeping the day away, so I thought I would update this labor of love...I mean, blog to let you know how Alaska is going. We are about 10 miles north of Anchorage right now and we are camping near eagle River. Supposedly it is full of salmon, but you can't fish because this portion of the river is closed already. They take their salmon fishing seriously around here.

We arrived here 2 days ago, but before that, we are parked by another river, just south of Talkeetna, where we did some fishing. We bought a 3 day fishing license and 3 days worth of King Salmon stamps so we could catch the big one!  We got down to the river at 9:15am and Joe caught his first salmon by 10am. You can only keep one salmon per day, with a maximum of 5 for the season. Well, that his one for the day.  It was a nice one too!  He took it back to the camp and filleted it and I went back and grilled a couple fillets for lunch. I didn't catch anything that morning and decided to stop fishing for the day because it was rainy and cold. Plus, there were 50 other people out fishing on the bank right next to me. That night, we met up with the people that run the company that rents out Joe and Jan's cabin in North Carolina. (Johnny, Dena and their son Ross and his friend Connor.) They have some property in Talkeetna, and were up here on vacation also. We had a good dinner in Talkeetna at a place that has huge caribou burgers. I had one, and it was really good! Then, they showed us their property, which we are going to stay at, when we drive back through Talkeetna in the next couple of weeks. Then, they took us out and showed us a closed, satellite station where the US used to watch Russia. The satellites were huge!  I have a picture of them below.

The next day, we got up and went down to the river again to see if we could catch another salmon. We had a few bites in the morning, but no fish. Joe had one on, but he jumped off after a few seconds of fighting him. We watched a few people pull some in, but they were down the bank from us and they were all casting into a honey hole. We couldn't get down there because there were a lot of people on the bank fishing. Around 5pm, after many more bites, I finally hooked one.  It took the drag out and jumped all over the place. You have to yell "Fish on" when you get a fish, so everyone can reel in their lines and get them out of the way because the fish run up and down the bank and with that many people fishing, the lines get tangled easily. So, I yelled "fish on" and fought the fish for 10 or 15 minutes. Everyone on the bank was oooooing and ahhhhhing because it was a big one. After getting it up to the shore finally, we all saw that the hook was actually in the tail of the fish. On no! If you don't hook the fish in the mouth, it is called a foul hook and you have to throw it back. Crap! It was the biggest one of the week and I had to release it!  It was about 40 lbs, at least that is what the locals said. One guy said it was 60lbs, and I appreciated his optimism, but it was more like 40. Well, at least I got to catch a fish...after 7 hours of fishing. I didn't get a chance to get a picture with it because everyone was ready to get their lines back in the water, and I was in their way. Plus, everyone carries pistols and shotguns down by the river so I didn't want to make anyone mad.  We didn't catch anymore fish that night, so we packed it in and Laurie and I got our butts beat in the game Sequence.  First time on this trip that we got beat badly!  Joe and Jan won 5 games and we won 2. You can imagine our disappointment!

We left that camp site and drove down to Anchorage where we are now. We spent all day yesterday planning out next week's route down into the Kenai Peninsula. We are going to see some glaciers, do some fishing and take in the awesome scenery down there. We drove through Anchorage last night, on our way to see a tidal bore, and it looked like a nice town. We are going to check it out today.  As for the tidal bore, we either missed it or it was a little ripple on the surface, because we didn't see anything. Laurie thinks she saw it, but I told her that was a ripple from the wind. Hopefully we'll get to see one next time we drive down that way. Well, I am going to wake Laurie up and get things moving. It's 11am already!  Time to get up!  I'll update later when I can!  See ya! 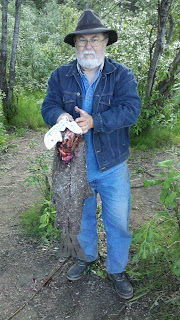 Posted by Pete Stephens at 2:58 PM