We're Back in Seattle Again...back where the rain is a friend...

Yes, that's right, it is raining in Seattle again, but, not sleepless. We slept so good last night. Surprisingly, I was the first one up at 8:15. No one else got up until 9:30 and 10:15. Obviously we had some slept deprivation going on...either that, or we partied too late last night.

Last time I updated this, we were just south of Seattle. We took a left turn and went up to Olympic National Park for a day. We drove East of the park, along the water and enjoyed some beautiful views of the Sound. We stopped along the way at Taylors Shellfish shack and picked up some oysters. I bought 12 in-the-shell oysters and Joe bought 9 oysters that had already been shelled. We stayed in an indian casino parking lot that night and fixed those oysters for dinner. Let me tell you, when you eat as many oysters as you can, and still have some leftover, you will feel like they are still swimming around inside of you the next day.  Our stomachs hurt all day long the next day!  But, the oysters tasted great!  I just won't eat as many as I did that night. We drove to the National park visitor's center and watched a video on the park. Then, we went down by the ferry dock in Port Angeles and had some lunch. No, not oysters, chicken fingers! :)  We checked out Port Townsend on the way back down towards Tacoma for the night.  That was a cool town...Port Townsend.  There are cool little shops and restaurants along the water. They say that they don't get as much rain as Seattle gets each year.  We drove down to Tacoma and parked in a marina parking lot for the night. Actually, that is where we kept the motorhome while we went to Newport for the wedding. I thought it was funny that I found a marina to keep the motorhome in for a few days. The security guard was very nice.  He said he would watch out for the RV while we were gone and that we made his night talking to him. I guess there's not much to do around there all night.

Joe dropped us off at the airport on Thursday morning and we didn't get into Providence until about 2am. That was a long day. We checked into our roach motel and got some well needed rest before the weekend began. Friday, we tooled around Newport; shopping, checking out the sites and walking along the cliff walk where the mansions are located. It was foggy during most of the day, but it burned off for about 2 hours in the evening. We got to see some of the mansions and coastline when the fog burned off.  We like Newport a lot!  You can't go wring with boats, bars, restaurants and shops. The town has something for everyone.  We met up with Todd and Shana and some friends and family later that evening for dinner and had a great time! Saturday I picked up Mo and Mike from the airport and ran some other errands throughout the day. We had a nice schooner ride with everyone that evening, out in Newport harbor. Sunday was filled with wedding rehearsal and lunch, which was great!  On the wedding day, it was supposed to rain, but prior forecasts said that it was supposed to be the nicest day out of the weekend. I'm sure Shana and Todd were stressed because the wedding was supposed to be outside. Well, it turned out beautiful!  The sun was shining, there was no fog or clouds in sight and there were sailboats out in the harbor. The backdrop for the wedding was beautiful. We were overlooking the harbor. The wedding, reception and after reception reception went off perfectly. Everyone had a blast.  Shana looked beautiful and Todd looked handsome. I took photos on Mo's camera, so when we see her in a few weeks, she'll bring the disk with the photos on it. We had a nice flight back to Seattle too.

Jan's 21st birthday was on Tuesday, but we didn't get in until 10pm that night, so we weren't able to celebrate then. We ended up celebrating last night at the Space Needle restaurant. It is a revolving restaurant on top of the the Space Needle in Seattle. The food was great, the views were awesome and so was the company. We had a very fun night last night, which explains everyone sleeping in today.  We finally made it to Pikes Market this afternoon and then took a tour of Underground Seattle.  The weather turned out to be sunny while we were walking around downtown, then it started raining again...and hasn't stopped since. We are staying in the Walmart parking lot about 15 miles north of Seattle. It is pretty close to the Boeing plant where Joe and I will be taking a tour tomorrow before we head North towards Anacortes.  I'll post some photos from today, the next time I blog. We hope everyone is doing well.  We are still having a blast out here. Like I said back when we started, if anyone wants to join us at any point, come on out!  Talk to you soon!  Good night. 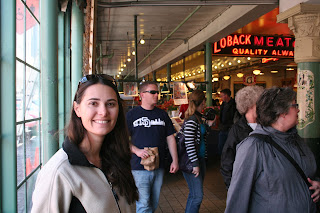 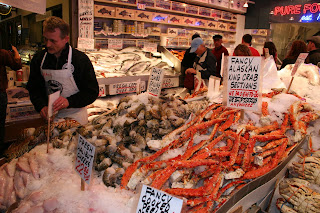 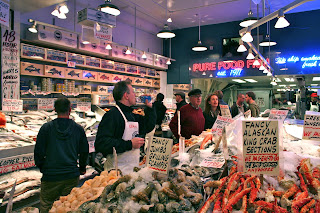 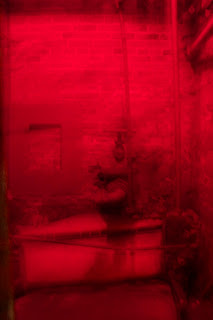 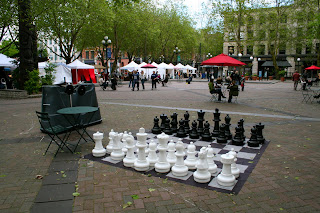 Posted by Pete Stephens at 2:38 AM