Mt Rushmore, Custer and the Badlands.

Things are definitely on the move for us, as we make our way home.  The stops seem to come and go a little faster now...if that is possible because we have been going, going, going for a while. We are parked outside of the Badlands National Park in South Dakota, in a campground now.

We saw Devil's Tower in Wyoming two days ago.  It was lava that was pushed up to the surface many years ago.  It stands about 870ft tall and is very big around. It's pretty amazing to see what nature can do. We took a walk around the structure that night and saw some climbers making their way down from the top. I would have loved to go up top, but there was no way to do it beside spelunking, and I don't have any gear like that.  We camped in the Park that night and were awoken by slamming doors, tailgates and other noises, at 6am!  We haven't slept good for the last week because we have been staying in campgrounds and tent campers and motorcyclists get up early.  I'm not happy about that. Next to the campground were prairie dog villages.  There must have been 100 prairie dogs out in the field.  When Mindy walked up where they could see her, the PD that stands guard started making this noise that sounded like a loud squirrel. He was warning the others that a real dog was near. The prairie dogs in WY are bigger than the ones in Colorado.  I guess they eat more! 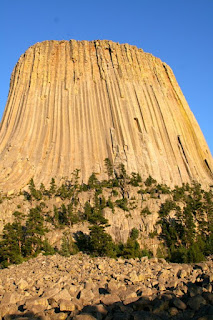 Driving through Wyoming was pretty.  There are mountains that we crossed at a snail's pace because the motorhome wouldn't go any faster up the inclines.  There are plains that we drove across and rolling hills also. We loved the drive into the Inyan Kara Mountain area. There are valleys with rivers and many beautiful houses. The temps are starting to rise because we are starting to sweat again.  That's ok though because it's nice to feel a little heat for a change.  Plus, 85 degrees is not really hot. :)   After we set up camp, we drove through Custer Forest, into the State Park and to MT. Rushmore.  The bikers are headed to Sturgis for the rally on Monday, so they were everywhere.  No offense to the courteous bikers, but I am not fond of bikers...and they are probably not fond of me when I am going 15mph up a mountain incline.  They want us to watch out for them, yet they do stupid stuff that puts themselves in danger.  I'm going to make a bumper sticker that says "Bikers Suck." (Maybe I've seen too many reckless and disrespectful bikers along this trip.)  Sorry about the tangent...We drove through Custer, SD and it was a cool little town.  It had many campgrounds in it and some cool shops and restaurants.  It's a place to brings kids if you have them. We drove through Custer state park and took the scenic wildlife loop also.  The rock formations and the rock mountains were spectacular.  We drove through small, one lane tunnels and saw some buffalo, tons of deer and even some friendly, people-food-eating burrows.  The mules were walking in the middle of the road and when people would slow down, the mules would walk over to their window and expect some food, or they would just move to the next vehicle.  It was starting to rain hard while we were watching them, so I was only able to feed the mules a cheddar cheese cracker. He ate it and moved on.  It rained pretty hard for about an hour, so the rest of the loop was seen with the windows up while trying to see through the blowing rain.  We arrived just outside of Mt. Rushmore and it stopped raining.  We were able to view the mountain from afar and get some good pictures.  We drove up to the park and paid our $11 parking fee and walked inside.  The carvings were a lot smaller than I thought they would be, but were also pretty far away.  I pictured the mountain to be a little bigger because of all of the movies I've seen, has made it look huge. But, it was an amazing work of art. I have always wanted to visit Mt. Rushmore and was finally able to see it in person.  The monument area was done nicely.  They had a nice visitor's center as well as an exhibit hall and gift shop.  We walked around for about 30 minutes, took some pictures, then drove into Keystone (a town about 2 miles from Mt. Rushmore) for dinner.  We ate at a "Home Cookin' Place."  The buffalo burger was great!  We wanted to watch the night show where they light up the faces so after dinner, we drove back into the park and watched the show.  It started at 9pm when it got dark.  A Ranger did a talk for about 10 minutes, then we watched a movie on the 4 Presidents, then they lit up the faces and we saluted the active and inactive military members of the audience.   About half of the audience was in the military and were able to walk up on stage while we clapped for them.  After we all got back to the truck, Joe said, "does anyone else think that we really screwed up?" We all knew what he meant and said, "yes!"  The leaders of our country are turning over in their graves to see what kind of mess this country is in right now. Washington, Jefferson, Lincoln and Roosevelt all gave something to this country and honored it.  It was pretty moving to watch the video and see how much they loved America. We made it back to camp at 11pm and went to bed after a long day...again. 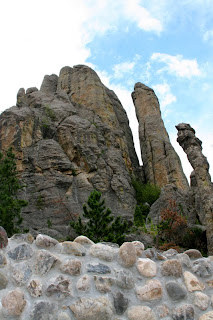 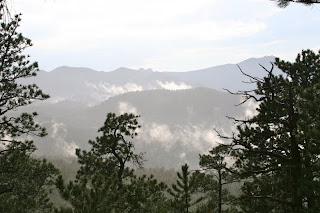 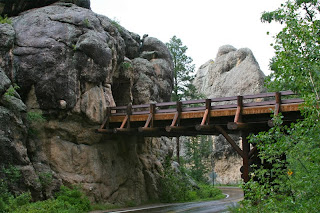 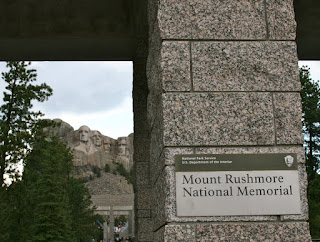 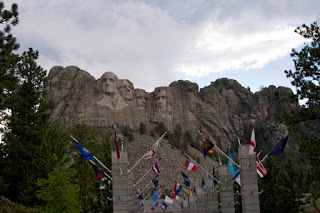 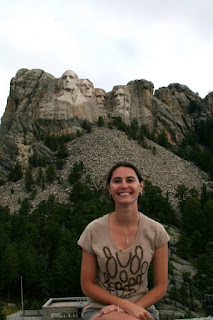 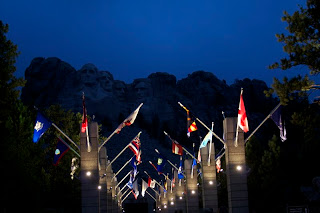 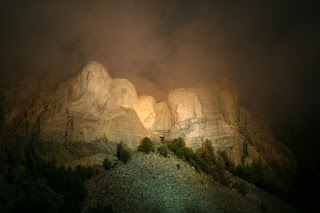 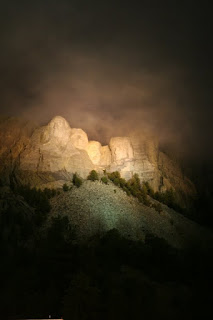 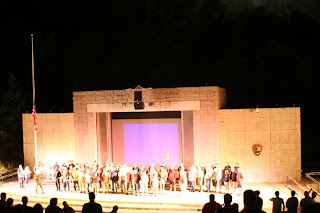 This morning Laurie and I got up and went to take the Jewel Cave tour.  It's a cave that is over 150 miles long (and that is only 10% because the rest is not surveyed yet) and it is underground in the Black Hills of South Dakota, right near our campground.  The tour lasted about 1.5hrs and was done nicely.  The  Ranger did a great job guiding all of us through parts of the cave.  It was interesting to see the Stalactites and the Calcite formations that looked like crystals.  I would have loved to be one of the first to explore the caves.  At one point the ranger turned the lights out and it was so black you couldn't see anything. 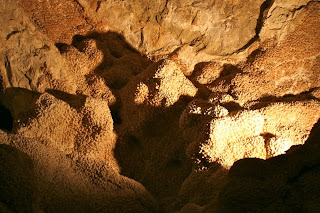 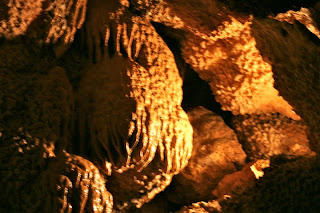 We drove 4.5 hrs to the Badlands today. South Dakota has many fields of wheat and rolling hills.  Not really a lot of trees though.  There is this town called Wall, SD.  It has a huge mall area, more like an amusement park, that people stop and visit, called Wall Drug.  We walked around there, got a milkshake and took off.  The crowds were pretty big, but it was interesting to see.  I guess that is a big attraction when traveling through there. The Badlands are pretty.  They are rocky, sandy and grassy.  They remind me of driving through a smaller scaled grand canyon.  We drove through at dusk, which made it prettier.  We saw a few got alongside the road as well as deer.  Tomorrow, after we take a missile silo tour, we are starting our final drive home.  We don't plan on making any extended stops along the way, but maybe through Nashville to see some friends. This was the last park that we had laid out for our trip.  It's sad that the trip is coming to a close.  I guess it's time to get back to reality for a little bit...until the next trip starts.  I'll keep you updated of our ride home.  Good night! 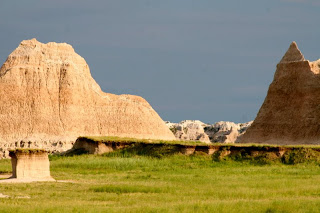 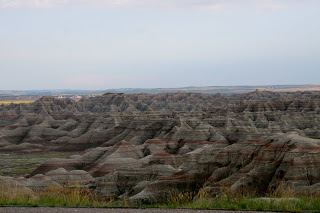 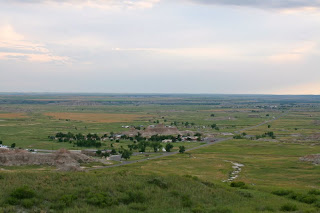 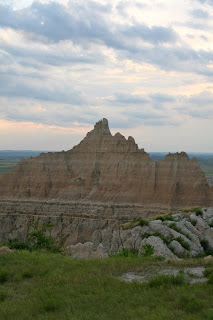 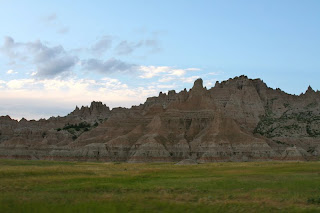 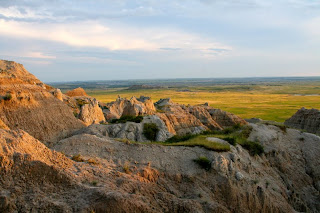 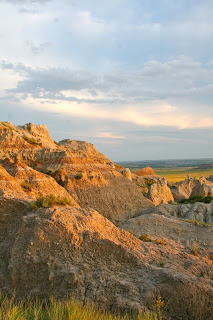 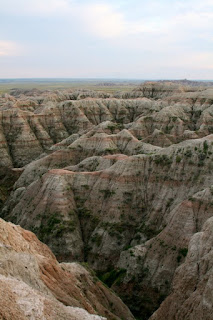 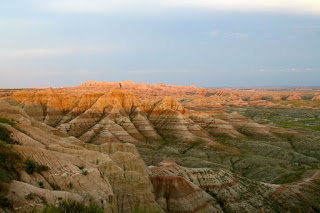 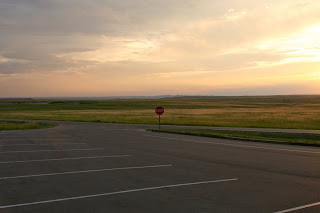 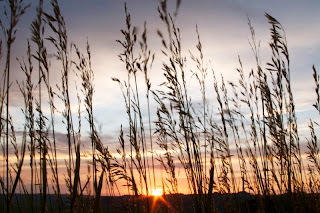 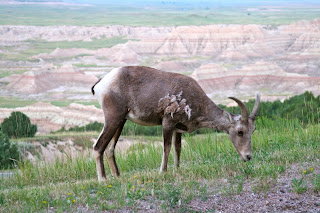 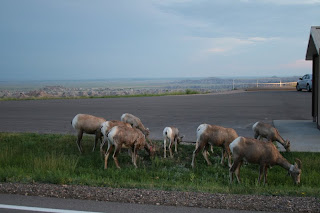 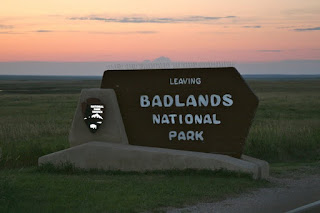 Posted by Pete Stephens at 2:11 AM