Hello again! It's been a couple of years since I have posted anything on this blog, but I figured this trip is worth blogging about.

We are in Cape Town, South Africa now, and it is their winter time.  We flew into Johannesburg after a 16 hour flight from Atlanta yesterday, then boarded a 2 hour flight to Cape Town after that.  It was a lot of flying, but so far it was worth it. The weather is in the 50's but it is sunny and beautiful. Laurie, Mo, Mrs. Healy and myself are on this trip together.  Laurie's parents are watching Lilah and Greta for us.  I hope they are behaving!

We are meeting up with our tour group tomorrow and today we had a free day to do whatever we chose to do. We decided to take a hike up a mountain called Lion's Head. We heard the views were amazing and the hike wasn't that bad, so it sounded like a great plan.  It would give us some much needed exercise after sitting on a plane for so long.  We asked the taxi driver if he had ever hiked the mountain and he said no, that wasn't a hiker because he had a bad hiking experience when he was younger from having the wrong shoes on. It must have REALLY been a bad experience to ruin him for the rest of his life.  Later in the car ride he told us that the hike was easy and he even told us how long it would take. I thought that was funny coming from a guy who had never hiked this trail. As we were walking in one of the more difficult portions of the hike, Mrs. Healy and I were wondering how he thought this was an easy hike. We were climbing rocks and walking along cliffs to get to the top of this mountain. Not that easy! 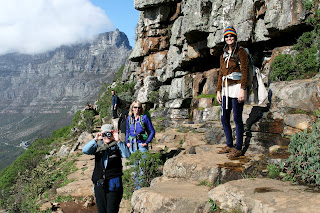 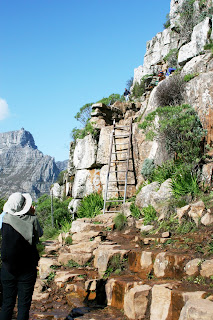 The views were spectacular though.  Cape Town is a very large town along the coast of South Africa.

The entire crew almost made it to the top of the mountain, but about 15 minutes from the top, the climb got very difficult. There was more rock climbing and less hiking. I ended going by myself to the top.


On our way down the mountain Mo had a feeling she was being watched by something.  It turns out, she was!!  We don't know what these little creatures were, but they were similar to our ground hogs...without a tail.  They hang out in the crevasses in the rock. They had a mean look on their face, but that's about all.  I think they were mad because we were walking by their territory. 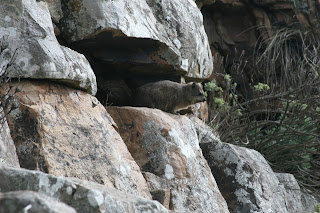 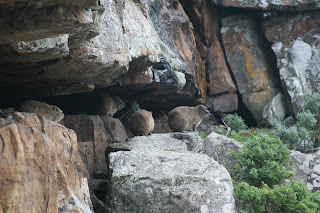 After hiking, we went to a lookout area where people paraglide and take pictures of the ocean and Cape Town.  This place is truly beautiful. 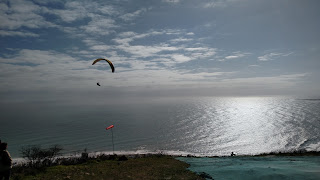 We walked around the waterfront area for a couple of hours after hiking. There are shops and a market where you can buy handmade items. It was a bustling area.  The people here in Cape Town are very nice.  Most people have smiles on their faces when walking around.  The food is excellent and the city is very clean.  We are impressed with the exchange rate and prices of food. The 4 of us had dinner tonight for $52!  That included our meal, dessert and drinks. 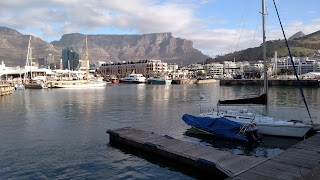 We start our tour tomorrow at 7:15am so we are going to bed now. I'll update with more pictures and blogging when I get another chance.  Good night!
Posted by Pete Stephens at 4:10 PM