Back in Nashville...at least one of us is.

I (Pete) got back up to Nashville after a short trip home, on Monday.

We had a very good weekend last weekend. We had some good friends in town that stayed with us on Friday night.  Then Saturday, we met up with some more good friends, Jason and Becky and their Niece and Nephew, and ran into Mom and Dad at the Plant City car show. We all went to Chancy's for some fried catfish and gator. (everything on the menu is fried!) I had my fill for a few months. I think the catfish was still swimming in my stomach on Sunday. Sunday, I got dropped off at the airport and Laurie picked up Jenna (it was Jenna's birthday on Sunday) and took her over Denise's for a surprise birthday party. I was bummed that I missed the party but I'm sure a good time was still had.

It's Thursday now and we have about 2 inches of snow on the ground already. It started snowing around 2pm today and hasn't stopped yet. I am listening to Radio Margaritaville hoping that it would make it feel a little warmer, but it isn't working yet. But I do have a nice heater going, so that is making it warmer. Plus, I am supposed to meet Jason down at Margaritaville in Nashville for dinner. So, maybe that will help with the cold also. :)

This is an update on what we are doing and where we are and what we have planned. We decided that we are going to go out to Alaska in the Summer.  Beginning in June and continuing until August. We are still on the "do it while we can" kick. Joe and Jan are going to go with us (they are looking for a fifth wheel to pull so they don't have to travel in the motorhome with us. I guess traveling that far with 4 people and 2 dogs in this motorhome would get tiring. I know 5 people and 2 golden retrievers was a little much when we were stationary in the keys last September.) Anyone else that wants to go and can go, are welcome to come along. If you can't make the entire trip, just fly out to meet us somewhere. That's another reason Jan and Joe are looking for a fifth wheel, so we can have visitors. hahah!  I'm sure they love me advertising their place as a hotel. They got a new truck today, to be able to pull the fifth wheel.  It's pimped out! 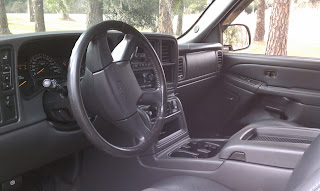 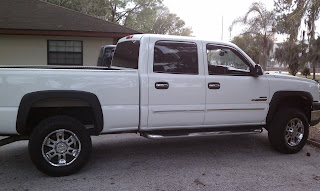 We have become a fixture in Dale and Bobbi Jo's (Keith's parents) yard in Nashville for now.  They have been so gracious to us and we can't thank them enough.  I have been helping Dale and Jonathon load wood into a truck and take it to the burn piles.  We are cutting out a taxi way for one of the neighbor's houses so he can get his plane to the runway. (Makes sense) I am looking for a contract job up here to help with the gas money for the trip.  We plan to go to Shana and Todd's wedding up in Rhode Island at the end of May and then head up through Canada over to Alaska.  Hopefully the Motorhome will make it!  It hasn't liked the cold weather lately and is proving it to me by breaking water lines inside. I have had to repair a few of them lately.

We hope you all are doing well. Laurie will be in Nashville on Saturday afternoon and I want to play some open mic nights when she gets here. I'm going to go listen to some music tonight in Nashville.  They have a pretty good show at the Bluebird Cafe tonight. Hopefully they don't cancel it due to the snow. I'll keep you posted on any news, happenings or country music singer sightings around here.  See ya later!

Posted by Pete Stephens at 7:29 PM