Howdy ya'll! I am back in Nashville and Laurie will be back on Wednesday. We got 4" of snow yesterday and we are expected to get 2 more tomorrow. It's nice living in the arctic! Holly loves the snow. She will run around like crazy and dig her nose in it.

I got into Weeki Watchee at 1:30am on Sat morning last weekend. I had to come down and grab some clothes and pick up the Chevy and leave the Ford at home. Last week, the Ford's transmission went out. I was taking Laurie to the airport and it started making this high pitched noise going down the interstate. I look in the rearview mirror and there is white smoke blowing out from the truck, covering the entire freeway!  All 4 lanes. People driving behind me were hitting the brakes and then speeding around me.  The smoke lasted about 10 seconds then it stopped. I was able to make it to the airport to drop Laurie off and then I limped back to the motorhome. I found a used transmission at a salvage yard outside of town and had a local mechanic install it.  They did a great job and I was able to drive it home without any hiccups. I did catch a cold or some bronchitis from not sleeping too much. I have been taking it easy though.
We have been going to the Bluebird Cafe a lot since we've been up here.  They have writer's nights during the week where they invite 4 writers that are known around town (have their songs cut by artists) and they sit around in a circle and each play about 4-5 of their songs.  It's a good time and sometimes other people will show up and sing a few songs. Trent Willman showed up the other night.  He's a fairly new artist in town. There is something going on most nights down in Nashville, so there's no shortage of entertainment.
I went to a place called 3rd and Lindsley and saw some of the members from the group Alabama the other night. It was the Bass player's (Teddy Gentry) birthday and he was having a party to showcase his new band. The other members surprised him and played a few songs for everyone. What a great surprise! 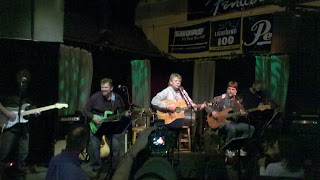 That's all of the updates for now. When I get off of this Nyquil I'll write some more.  I can't see the keyboard anymore. Good night!  Happy birthday Mom!
Posted by Pete Stephens at 10:48 PM