Hello Everyone! Time to catch you up.

Hey again! I have had many requests from our fan base, to update our blog before we leave to head out West.

To catch you up...we left Nashville a few weeks ago and stopped down in Port St. Joe, FL for a few days. We met Joe & Jan there for their maiden voyage in their new fifth wheel. We stayed at St. Joseph's State Park on a peninsula by the beach.  It was beautiful.  The weather was nice and it was good to see a little sunshine since the winter up in Nashville was mostly cloudy. My legs were blinding others when the sun hit them. They hadn't seen the light of day in months!  We did some bike riding, dog walking, played on the beach, buried Holly in the sand again and pulled Brad (Laurie's brother) out of the sand because he got his truck stuck. Dang 2 wheel drive trucks!  No offense!  We had a great time and it was nice to hang out for a few days. Here are some pics... 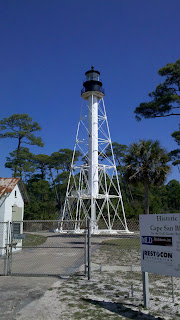 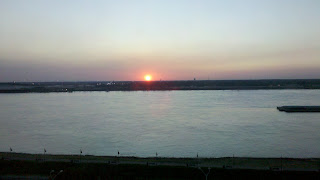 We have changed our plans...again...We are leaving around the 3rd week of April to start our trek out West and then eventually to Alaska...if we don't run out of money because of gas prices. We have been getting the motorhome ready (waxing, fluid changes, stocking it with canned goods, etc) for the past few weeks, plus working on our Tampa house still.  The Tampa house is...dare I say...almost finished. We have some trim pieces to finish, but things are wrapping up nicely. We have a plan of travel on our map on the wall.  Laurie put post it notes on the map of things that she wants to do and ideas from others that have traveled out West and to Alaska before.

First stop is Natchitoches, LA, where they filmed Steel Magnolias. We have been there before but weren't able to stay more than a few hours.  It's a cool little town along a river. We'll probably stop there for one or two nights on our way out to the Diamond mines in Arkansas. Laurie wants to dig for diamonds...literally, you can.  They have a state park with a natural diamond mine.  It's a big field of dirt and after it rains, it washes the dirt down so you can hunt for diamonds easier. I'm not expecting a "blood diamond" ordeal, but it should be fun. We want to try and teach Mindy (Joe & Jan's dog) to sniff out the diamonds over 2ct. because she has a great nose.  The trick is how do you teach her to sniff diamonds? Telluride, CO, The Grand Canyon, Redwood Forest and more than 20 other places are on our list of to-do's. We are looking forward to the trip. I want to try and pick up some singing "gigs" along the way if we stop and stay in a town for a few days. I am setting up a new blog with my music on it, so you all will have to follow that one too, so I'll look popular...even if you don't like the music. haha!  I can send the blog to the places that I want to play and say, "see I am popular back in Florida, I've got 11 followers..." we just won't tell them that they are all family members in one way or another.  I'll take some pics before we leave, of the motorhome and update along the way.


We hope everyone is doing good!
Posted by Pete Stephens at 11:43 AM