Hi again!  It's blogging time again because we are out of the cold and the llllooonnnnggg winter up here in Tennessee and we are starting to get outside and have some fun again.

We loaded up the camper on Saturday after we went to a few yard sales in East Nashville. Side Note: The yard sales over in East Nashville are so good!  There are at least 5-10 of them every weekend and it's tough to get through all of them before they start closing up!  I found an awesome hiking backpack at one of them and we found a dog crate carrier that folds down at another sale.

We took off for Fall Creek Falls towards East TN.  It took about 3 hours to get there pulling the trailer, but it was a nice ride.  The weather was sunny and 73. I booked a campground outside of the park because the park's campground was full.  It is Memorial Day weekend and there were no reservations or empty spots in the park.  The campground that I booked is called Mountain Glen RV Park.  It was a very nice campground with a 2 acre lake to fish in, full hook ups and a game room.  We parked and got things setup for the night and took a walk around.  There were kids everywhere!  It's a great campground for a family with kids because there are a lot of activities.  We took Lilah for a walk down to the lake and she chased some geese away and then we ran into a nice couple that were on their honeymoon, from Georgia.  Their names were Brad and Lil.  They were so nice...actually everyone that we met this weekend was super nice.

Jason, Erika and the kids were coming over on Sunday for the day, but before they came over Laurie, Lilah and I went to Fall Creek Falls park to do some hiking.  We hiked down to the falls, over lots of rocks, and took some pictures along the way.  It's tough to make it down in a good amount of time because everyone that we passed wanted to pet Lilah.  It was fun though, and she didn't mind it one bit. 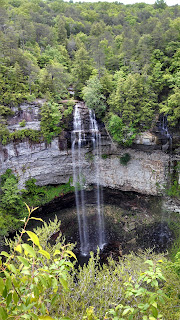 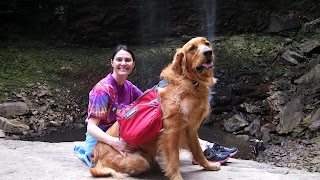 Lilah carries her water and poop bags as well as our water, crackers, phones, keys and misc items. :)
It helps wear her out so she doesn't want to pull me down the trails all the time.

We hiked down Piney Creek falls as well and that was pretty cool. You have to cross a suspension bridge to get to the falls and Lilah didn't like that.  She knelt down with every step, but she made it! 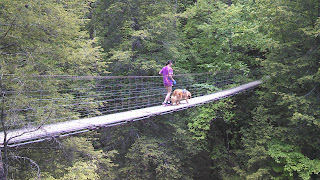 Crossing the bridge! Wait! I want to take a picture! 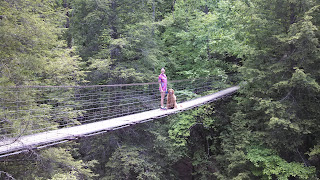 We tried to get Lilah to jump in the creek but she hasn't gotten too familiar with swimming yet.  She wades in it and drinks it, but she still won't go swimming.


Jason and the family showed up at 2pm and we took the boys down to the lake at the campground and fished (I fished and the boys played in the water). I did catch a small bass and tried to get Colton's attention to come reel it in, but the fish got off before Colton made it over.  We played some cornhole and watched the kids play and then grilled some burger and hot dogs.  The sun was shining full blast and it was just a beautiful day.  We had a great time playing with the kids and talking with Jason and Erika.  They left at 7pm and we had a good night's rest from the long day.

Monday, Memorial Day, I got up and cooked some bacon and eggs before we went to the park to ride our bikes along the lake.  We went for a 5 mile bike ride and then took Lilah to the lake to cool down a bit.  I was able to pull her out into the lake a little because we had her lifejacket on.  She swam for about 3 seconds before her feet could touch the bottom and she ran out of the lake.  I think she liked because she was so excited that she ran to shore and kissed the ground....just kidding.  She came back out and swam a little more.  I think that once the water gets a little warmer (for me that is), I will be able to get her to swim out to me. 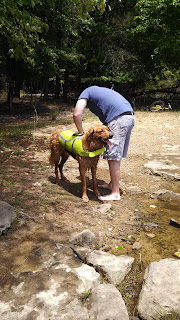 Suiting up for the swim

Checkout time at the campground was 1pm so we had to go get packed up.  Although we didn't get out of the park until 2pm, no one said anything.  Most everyone was gone anyways and we didn't want to get caught in the mass exodus leaving the campground.

We made it back to Nashville in 2.5 hrs after a stop at Sonic in Crossville for some icecream.  It was an awesome weekend and we can't wait to go out to Fall Creek Falls again and explore more trails. 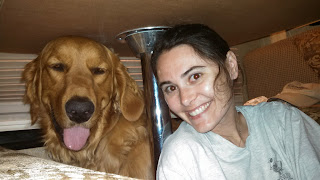