I have a little bit of battery left on my laptop, so I'll update as much as I can until it goes dead. Right now, we are at the Grand Canyon campground with no electric, so that is why my battery is not charging (not that you cared anyways). It is still very cold outside!  It was a high of 56 today and it is going to be 20 tonight. Everyone that we have talked to that lives out here, said that this weather is very unusual. Right now it "supposed" to be in the 80's in the afternoon. That's another "of course it is cold, because we are out here" moment. Oh yeah, and it is windy too! The past 2 days have been exciting...with little hiccups. :) 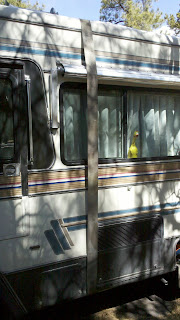 We hiked and climbed through Mesa Verde on Friday.  That was very interesting and I recommend that to everyone who gets out this way.  The indians built their homes in the side of the cliff walls. You can google Mesa Verde to learn more about it if you would like. We took two tours of various dwellings and as you can see below, they were amazing! The indians were very small though. They averaged 5'4" for men and 5' for women.  We crawled through tunnels, climbed ladders made from wood and descended and ascended steps built into the rocks.  The Indians were innovators. They formed mortar to build walls with rocks, they found springs located in the stone, they survived on the land and they came up with corn casserole. :) From the time that you enter the Mesa Verde park to the time that you get to the dwellings, it took about 30 minutes. It is quite a few miles in the park, climbing in elevation, all the way. We saw wild horses and deer along the way in. The park is atop of these plateaus and the canyons and cliffs run throughout the plateaus. It is pretty amazing that 85% of these structures were original and only 15% were reconstructed. 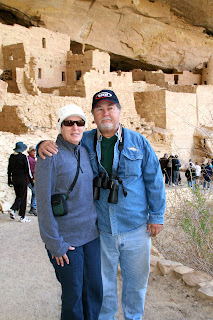 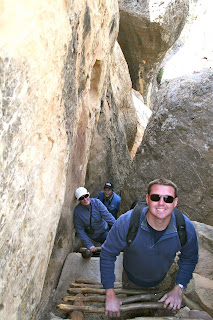 We left Mesa Verde and headed towards the Grand Canyon at about 5pm. The winds were blowing like crazy! About 40mph and we were driving perpendicular to it. I was talking to Keith on the phone and all of sudden, the awning blows out on the side of the rv. It starts blowing around and making all kinds of noise. I slow down and try to find a place to pull over on a 2 lane highway out in the middle of the desert. I found a place to pull off and Joe helped me out a bandage around the rv to hold the awning in until we can get to a better place to pull off. Our fix worked until I took it off today. The winds calmed down so I felt comfortable removing the strap. 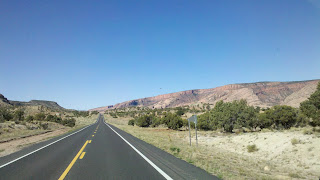 We stayed in Kayenta, AZ that night, behind a McDonalds. For those of you who have never been to Kayenta, there is no reason to go. It's just a gas stop and keep moving. It is Indian country out there and there are some poor towns. A lot of old, 1960's trailers with tires on their roofs to keep the wind from blowing them off. Talk about innovative!  I had 2 bums ask me for money at the McDonalds and I gave them a $10. I usually don't do that, but for some reason I felt like they would protect us. Ha! Well, they did, because we made it out of there in the morning.

On our way to the Grand Canyon, I saw this sign that said Dinosaur Tracks, turn right ahead. It was written in spray paint. I was like "man, that would be really cool to see Dinosaur tracks!" I wonder if they're real? Laurie was looking at her map and noticed that the Dinosaur Track place was on her map.  So, I pulled in! What the heck!  We are tourists and I have never seen dinosaur tracks. It was a dirt road that we pulled into. It had 5-6 shacks that were built out of 2x4's and 4-5 indians that started walking towards us. "Great, they are going to surround us," I thought. Circle the wagons! Just like in the old West. I pulled up and stopped next to this big indian. I said, I want to see dinosaur tracks.  He said no problem. I asked him how much, and he looked at me and said that it was up to me. Ok, no problem. I pulled over and Joe pulled up next to me.  I was the only one getting out to see the tracks because it was cold and because everyone else thought it was a hoax. I met JR, the indian and he walked me through the limestone beds with REAL tracks in them.  He told me that the students and professors from colleges came there to examine the tracks and told them what kind of tracks they were. We were out in the middle of the desert with nothing around, looking at dinosaur tracks. How cool is that?!  I paid JR $5 after taking some pictures and we took off.  He said that he gives tours of his village also, but I didn't see a need to go back to his village. Take a look at the pics below.  This was definitely a highlight for me! 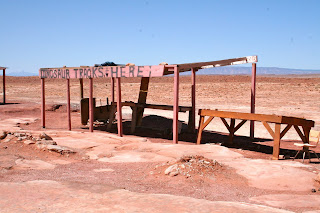 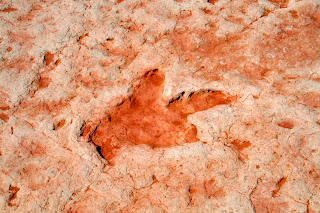 We made it to the Grand Canyon at 2pm and checked into our campsite, after a long drive through the National Park. I did get to stop and look out over the canyon for the first time, on the way in.  It was amazing!  It looked like I was standing on the top of a mountain, looking down into a mountain range. It is much bigger than Black Canyon in Colorado! We took a drive around Grand Canyon Village and tried to get our bearings on the place.  It's a very big park with many roads, but there are a lot of signs that tell you where things are. With all of the parking lots and tourists, you would think that you were at Disney.  We walked through the Visitors Center and learned about the history of the canyon.  It wasn't that crowded due to the cold weather and time of year.  We drove outside of the park to look at the National Forest land and to see if we could find somewhere to camp because you can camp for free in the National Forest land. We didn't have water or electricity hookup in the park where we paid $18/night  so we might as well camp for free somewhere with the same amenities, and a little more privacy so the dogs wouldn't have to be on a leash everywhere. We found a spot right outside of the National Park land. :) Convenient!  I walked over to Joe and Jan's trailer in the morning and found Joe inside freezing, trying to warm his hands on the stove burner. The battery in his trailer died, and the heat shut off during the night. Whoops!  He forgot to hook up the truck after we parked it last night, to charge the battery. It got down to 2 last night and he said it was 45 inside when he woke up. Brrrrrr.

We walked 2.5 miles today along the South Rim of the canyon.  They have a paved, asphalt path that is a nice walk.  We got to see the canyon along the entire path.  There were some great views! We had lunch at one of the places to eat along the way.  After lunch we headed out to our other camp site in the National Forest. We built a fire, I took a bike ride, had some dinner and then went back inside the park for the sunset. Beautiful!  I have to wrap things up soon because I am going to hie to the bottom of the canyon tomorrow and then hike back up tomorrow as well. 16 miles in one day. We'll see how that goes. :)  It's been nice knowing you all!  Hahah. I have packed everything that I "think" I need so hopefully all goes well. I'll take some pics along the way.  I am doing South Kaibab trail in the morning and Bright Angel Trail in the afternoon. We are heading to Sedona on Tuesday if my legs will be able to move then. Have a good night!  Oh and by the way, we are on Mountain, California time. That's what a park ranger told us when I asked what time zone we are on. We all had a great laugh from that, but come to find out...she was right!  Do you know why?  Here are some pics! 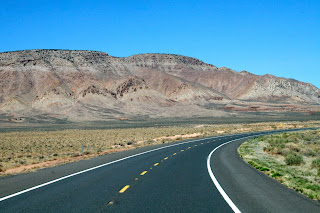 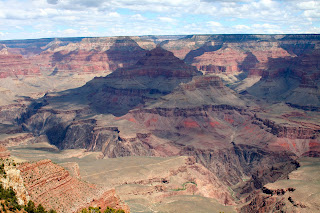 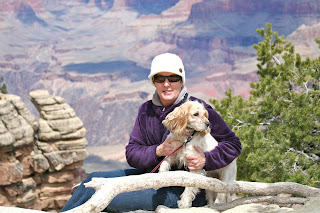 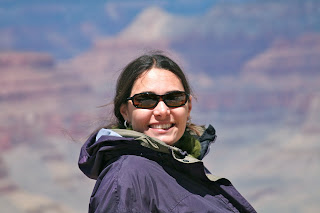 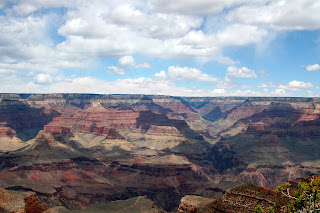 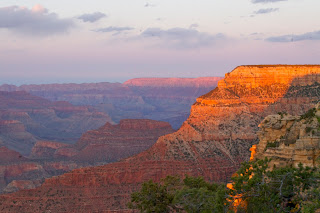