Left The Grand Canyon a Winner!

We made it to Sedona, AZ yesterday after staying in the Grand Canyon area for 3 days. We are leaving for Las Vegas tomorrow afternoon, but we don't know if we'll make it there by tomorrow night yet.


I got up at 6am on Monday morning and ate a banana for breakfast. Not really the kind of triathlete breakfast I should have eaten, but I'll eat more next time...Joe was nice enough to drop my off near where the South Kaibab trail starts in the Grand Canyon. I walked about a 1/2 mile to get to the trailhead because only buses were allowed near the trailhead...and I didn't take the bus. It was 25 degrees out so I had jeans, running shoes, a long sleeve shirt, a sweatshirt over that and a fleece over the sweatshirt. Not really hiking gear, but it's what I had. I took Laurie's backpack with me and it was filled with 3 bottles of water, snacks, matches, a flashlight, a knife (in case I had to find dinner) and my camera. The camera weighed the most! I started down the trail and gave myself 12-13 hrs to make the roundtrip adventure. The trails started downhill and 15 minutes into it, I could already feel my legs shaking…it was going to be a long day.  I met another hiker along the way and he asked me to take a picture of him and I asked him to take a picture of me. We ended up hiking most of the way together, until he left me towards the end of the trail up. The trail was scenic with many overlooks of the canyon and river below. The elevation change would be appx 5k feet to the bottom and back to the top. That's more than us Floridians see in a lifetime! The gravel was nicely packed so my feet didn't slip at all. I had a great hike down to the river and then my friend and I went and checked out the Bright Angel Lodge, where you can stay overnight before heading back up the trail. It took us 3 hrs to get to the bottom and that was 6.5 miles of hiking. Not bad at all.  By the time I reached the bottom, I had shed both the sweater and fleece and rolled my pants up because I was hot. The temperature at the bottom was 75. A 50 degree difference from the time I started. We had a drink of lemonade and some snacks from the lodge and then started our journey back up to the rim.  We left the bottom at 10:35am. The trail back  up was a little more dusty and loose sand.  The hike up to the halfway point wasn't bad. That was 4.5 miles.  There weren't many overlooks but it was nice still.  After the halfway point, it started getting steeper.  There were more switchbacks to get higher elevation.  Around the 3.5 mile mark from the top, I told my friend to leave me and head up because I was slowing him down. It felt like my body hit a wall and my legs wouldn't move anymore.  It was crazy. I wasn't out of breath and I wasn't thirsty, my legs just didn't want to be put through anymore work. After many stops to rest and endless switchbacks, I finally made it at 5pm. I was so tired by the time I reached the top, but it felt good to have made a hike like that and not have prepared at all. I would do it again if someone wanted to do it with me. I would wear different clothing and invest in some hiking boots and a new backpack. I had to have a celebratory beer at the top before Laurie picked me up, but sadly, I could only finish half of it because I was so worn out.  I know, I know…it's a shame!  Joe had dinner ready by the time we got back to camp and we all ended up going to bed around 9:30 that night.  Everyone else had a relaxing day. Laurie finished her book, Jan did laundry and Joe fixed some stuff and read a book at camp. 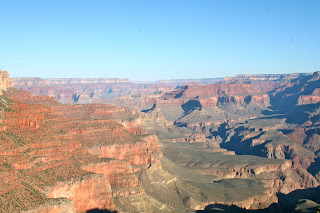 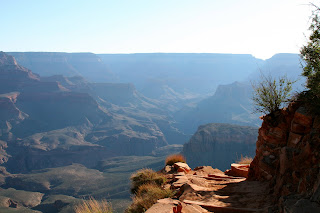 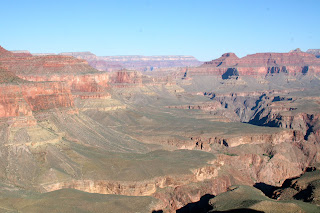 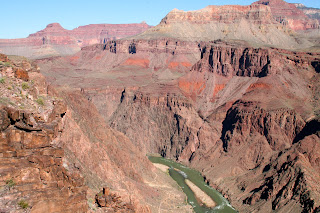 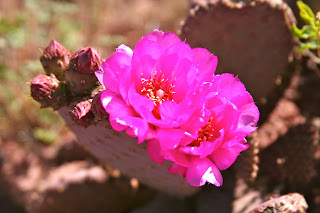 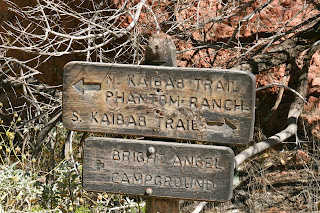 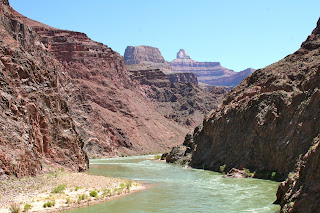 We left the Grand Canyon the next morning and drove to Sedona. My legs were sore, but I could still walk. I could definitely tell that I hiked the day before. Actually, I am still sore today. :) We found a nice road off of I-17, South of Flagstaff, to camp on.  It's a forestry road that used to be a wagon road in 1904, made of rock and dirt.  We took a truck ride over to Sedona from our camp, via the dirt and rock road. Boy was that rough!  The truck tires have 80lbs of pressure in them and it is a tough suspension truck anyways. We bounced for an hour trying to get 11 miles over to Sedona. There were pretty stops along the way but it was a bone rattling ride.  We drove up the Oak Creek Canyon on 89a for a few miles, then turned back around and headed to a restaurant that our friend Joe Grimes recommended. It is called the Cowboy Club. We ordered the appetizer plate with Burmese Python, Buffalo, Cactus Fries, Wings and some other weird food called carrots. I wasn't sure I'd be eating them though. :)  All of the food was great!  The snake was a little chewy, but it was really good!  The cactus fries were tangy, but awesome and of course the buffalo was good. I always like the buffalo.  Joe and I ended up eating the appetizers because Jan and Laurie wouldn't touch what was on that plate. I asked if the snake was free range or farm raised and the waitress didn't pay attention to me. Who knows!
We woke up at 8 this morning and Joe was gone to get propane (because it has been cold at night and he has been running the heat) and a few parts to fix some things on the trailer. I saddled up the mountain bike and told Laurie that I would meet everyone down in Sedona in about an hour and a half. I rode (bounced) down the dirt and rock road for an hour and finally made it to Sedona.  They picked me up in the truck and we went driving around to different shops and checked out what Sedona had to offer.  The weather was nice today. It was 80 degrees, sunny and not a cloud in the sky.  Perfect for outdoors.  We drove through Flagstaff on our way back tonight and that looks like a cool town also.  I wish we had a little more time to check it out, but maybe we'll come back again someday.  My computer battery is dying again, so I better cut it this off.  We're going to Slide Rock State Park tomorrow to slide down a rock, then start our trek to Vegas...baby!  Woohoo!  I'll be winning some gas money!  Hopefully we'll have some good fortune to write about next! Good night! Look out Elvis, the Griswalds are coming!  I found out long ago, It's a long way down the holiday road. Holiday road, Holiday road. 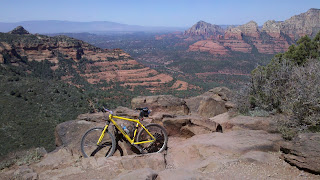 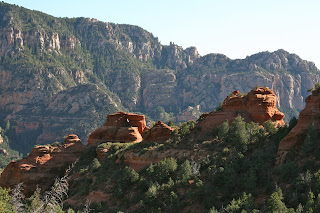 Posted by Pete Stephens at 2:33 AM