Digging for Diamonds and More

Good evening! We are sitting in the WalMart parking lot outside of Oklahoma City right now. It is 11pm and we just arrived after a stop at the Memorial for the FBI building. We drove from Murfreesboro, AR to OKC today. Appx 300 miles of driving today.  Here's an update on what has been going on...

We left the camp at 9:30am on Monday morning and headed for the diamond field. We watched a quick demonstration on how to Sluice for diamonds and what to look for. then, we rented a bucket, shovel and two screens for sifting the sand and clay. I was the digger (shoveler), Joe was the Prospector, Jan and Laurie were the Sluicers (running water through the screens to get the sand away from the rocks and daimonds).

We dug all morning until around 1 and we didn't find anything.  Laurie and Jan were talking with the local people at the sluicing area and supposedly our dirt was a good indicator of where diamonds would be. We met a nice guy named Dan, and he has worked in Alaska as a guide and spends his Springs down in Arkansas digging for diamonds. He sells the ones he finds in order to make a living.  Then, he goes to Michigan for the summer. You can search the surface for diamonds or you can dig for them. We didn't seem to find any so we went back and ate some lunch, then moved the RV's to the visitor's center parking lot because we had to out of the campsites at 3pm.  We went back to digging, but ended up digging in some other areas and still did not find anything. Laurie took some dirt home to bake in the oven, because Dan said that it will dry the rocks out and you can sort through the quartz and other stones and pick out the diamonds easier when they are dry. She sorted through half of the dirt and still no diamonds to speak of.


We enjoyed a relaxing night because we shoveled dirt the entire day.  The next morning we got to the field at about noon. We dug in another spot which was hard to get through the clay and "potato" rocks to get to the good soil.  That took us a lot of time and we didn't get to sort through that many buckets of dirt. No diamonds still. We went home at 5pm when the field closes and enjoyed a nice night.  I had the hammocks hung up, but had to take them down because it was going to rain. 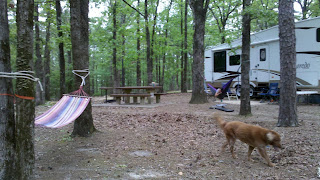 We ate dinner and Laurie started sorting rocks again, looking for diamonds.  She tests to see if the stones are diamonds (some look like diamonds, but are quartz) by trying to scratch them, cut them or squash them with a spoon.  If they break up, then they are not a diamond.  Laurie yelled, "I think I found one, but I lost it!" Everyone else wasn't that concerned. She tried to squash one shiny looking rock with a spoon and it didn't break. Instead, it flew out from under the spoon, hit the window of the rv (she was sitting at the table by the window) and fell onto the floor. Laurie checked the carpet for a few minutes, but the carpet in the the fifth wheel is shiny also.  It has little specks of gold in it. (Very nice looking, btw) She went back to sorting but finished with that and started looking for her missing diamond that she found...and lost. She finally found it and it looked very different from any of the other stones. It as small, but shiny and neat looking. We all thought it was a diamond.  Laurie was so excited that we found one! We actually found some Garnet also. We found it on our first day out and people rarely do that...at least that's what we were told.

I took it in with me this morning when I went back to the field to dig by myself. I couldn't get anyone else to go out with me because of the grueling digging, but I was determined to find another diamond. I got the stone that we found, verified by the park workers and received a nice box, picture and verification card. It is a slight yellow color, which is more rare than the white diamond. It is worth more if you sell it, but there's not much we could get for this one. Probably $50 or so, but it is our first find and you are not supposed to sell your first diamond find. :) I showed Dan our find, and he was so happy. He always suggests that people take their "centers" home and bake them. No one ever comes back with a good story though...except now.


We left after I got the mud out of my shoes and went back to pack up the camp. We ate at a small restaurant in town called Buddy's.  Joe had the biggest countryfried steak that we have ever seen.  They advertised it right. "The biggest countryfried steak." It was the size of his plate. He didn't finish it all for lunch but we ended up finishing it tonight after we stopped. We drove through Arkansas and Oklahoma today. There wasn't much to see, but we did drive through an area in OK where a tornado had blown through.  The "war zone" was about 0.2 miles wide and 1 mile long.  There was debris scattered everywhere.  It looked like a junkyard.  One Fifth wheel had a hole in it where a tree had fallen on it.  There were vehicles that were destroyed, houses that were demolished, storage rental businesses with everyone's stuff scattered over the property.  It was sad to see how fast things can turn into a mess.

We drove through a small town where there were two dogs in the road. One dog crossed the road and one stopped in the middle, right in from of our vehicle, rolled in a dead animal on the road, then kept walking. It was like we weren't even there with our bumper right on his nose. Must have been playing a game like that Geico commercial where the car rolls off the road from missing a squirrel.

When we got to OKC, we went by the FBI building memorial. But, before we got there, we had a little detour due to closed roads in downtown.  There was a bridge that was 11' 11" tall.  Our motorhome is 10.5 feet and I have a cooler strapped on top that is about another foot. Come to find out, our motorhome is 11' 11" tall with the cooler on top.  The cooler scrapped the bridge as we went under. But, Joe and Jan's RV is over 12 feet tall.  They had to hit the breaks and find another way to get to the memorial.  Good thing we went at night because there were barely any cars around.

The memorial is very pretty at night. I can't say much about it because it makes me sad to think that people are crazy enough to do these types of things. But, it is serene. 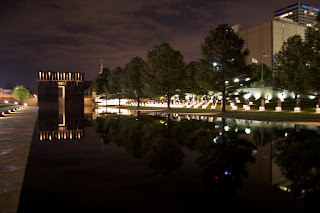 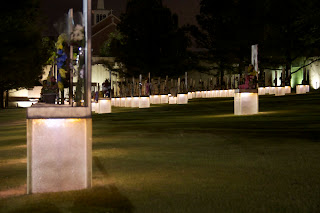 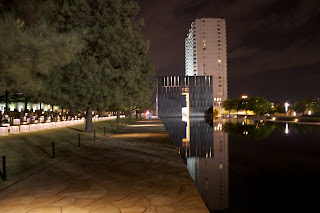 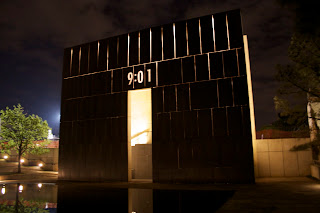 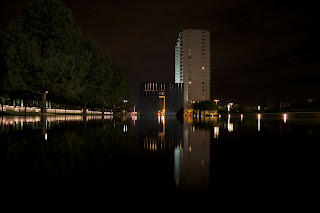 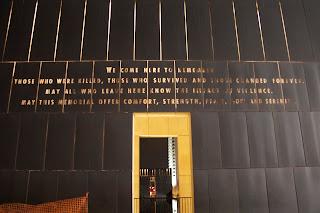 It's pretty late now and I have to change the oil tomorrow and do a few maintenance items before we leave the parking lot. We are headed up to Dodge City, KS (wild west town where Wyatt Earp and others have gone) tomorrow, on our way to Colorado Springs, Pikes Peak. I'll keep you posted!  We hope you all are doing well!  Adios and Via Con Dios!  That's about all of the "good words" of Spanish I know...c'mon we all know the bad words!
Posted by Pete Stephens at 1:56 AM