I can't believe it is Easter already. Seems like I was just saying Happy Thanksgiving not too long ago. I am sitting in the motorhome, typing, while Laurie is still sleeping...but that happens a lot. We are surrounded by about 1-2 inches of snow and we are sitting at 9300ft at Mueller State Park, in Colorado (Near Pikes Peak). We have had a busy past few days but I'll condense it into a few paragraphs. Don't want to wear you out with the boring driving stuff anyways.

We left OKC a few days ago (I say that because I can't remember what day...they don't have names right now) and drove to Dodge City, KS.  Home of the 2nd largest meat processing plant in the world. Yeah!  You're driving through the fields of KS (and by fields, I mean tons of fields. That is all there is.) and you come into this industrial town with corn silos the size of a 6 story building, railroad junctions and cows in pens. My eyes were going crazy trying to look at everything, since we hadn't seen anything for hours. Even cows were exciting!  :) Laurie had us pointed towards a Walmart parking lot in town, so after a rough ride on a brick road, we pulled in. The parking lot had a huge field right next to it, so we could let the dogs run wild. They were so excited. We unhooked the 5th wheel and rode into town to check out all of the shopping and wild west things to do. Ha! It took us 5 minutes to see what there is to do. You can go take a tour of a scaled down version of Dodge City, where Bat Masterson, Wyatt Earp, Doc Holiday and many more frequented. (Actually, I forgot to add, Dodge City was where the cattle market was and still is. Ranchers brought/bring their cattle into town to sell. After days on the trail, men would stop into town to sell their cattle, get a drink, entertainment and of course...women.) There wasn't any shopping...at least that Laurie and Jan wanted to do, so we had a nice dinner and went to bed. 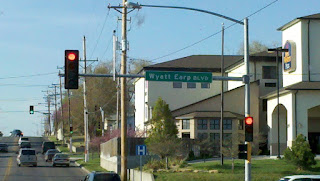 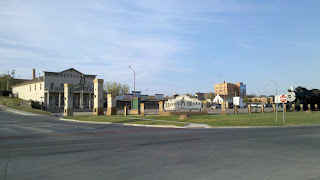 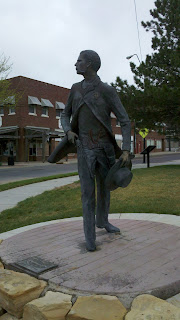 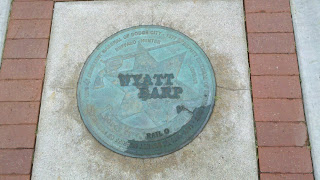 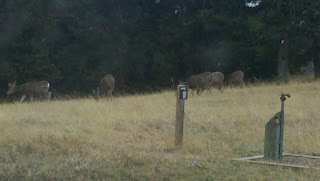 We woke up to the wind blowing the rv from side to side. It was blowing about 25mph and it was going to be a long day driving into the wind. We ran over many tumbleweeds as we were driving and they would blow right out in front of us. I didn't know whether to swerve to try and not hit them. :) Joe ran out of gas also. That's why he carries 25 gallons of diesel with him. We were almost to CO Springs anyways. We made it to Colorado Springs at 6pm on Friday. We made a trip into Sams to pick up some well needed items...you know, honey buns, oil, walkie talkies, etc...The essentials. We woke up yesterday morning and moved the rv's to Mueller State Park, near Pike Peak. It was quite a drive up to the park for the old motorhome, but she made it. I had to downshift into 2nd gear and drive 20mph-35mph a lot.  Good thing Joe is a buffer between me and other traffic, or I would be getting some nasty looks. :)  We saw a few deer while driving in the park.  They were used to people because I was able to get up fairly close (20ft) to them.  It was snowing on and off all day yesterday and was 30 degrees with the wind blowing. We all were pretty chilly. We weren't prepped for the cold. We brought shorts and summertime weather gear, not blizzard gear.  Laurie was able to find a couple of jackets at the Goodwill when we were driving around. We visited Manitou Springs where they have 7 natural mineral springs, each with a different taste than the other.  So, Joe and I took a walk to check out some springs and Laurie and Jan went shopping. The first spring we tasted was located in a store, right up through their floor.  It tasted like sulfur!  I had to hold my nose while drinking it. Needless to say we needed something to get the taste out of our mouths, so we bought some coffee flavored popcorn. We tasted 2 more springs and I liked the 3rd one the best.  It had a salty, carbonated flavor to it. I put my water bottle under it and filled it up.

Our next stop was Garden of the Gods State Park. You can drive around a loop and view all sorts of rock formations and hiking trails. We didn't hike any trails because of it being so cold. We took some great pictures. 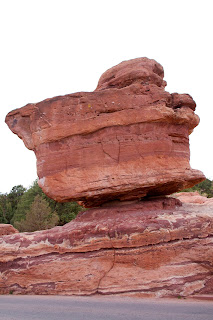 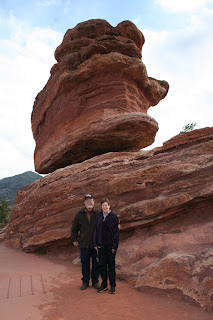 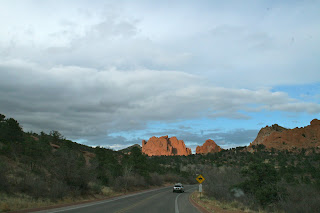 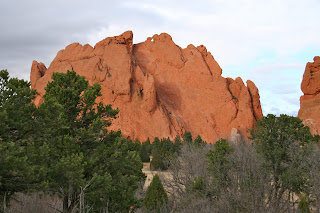 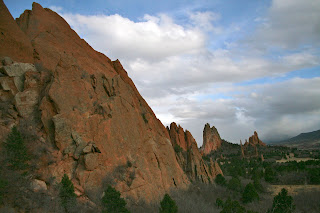 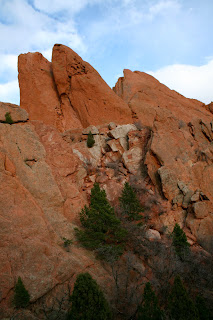 We made reservations at a place called Flying W Ranch, for dinner.  We heard that the food was great and the they have a band that plays after dinner. We drove up and there were turkeys in the parking lot. I thought they looked nice and plump, just right for cooking. It made my mouth start watering for some turkey and gravy.  But, they didn't have them on the menu. We enjoyed some good food and after dinner, there was a 4 piece band that played.  They played old songs like "Rawhide" and a song from Sons of the Desert. It was a well oiled machine, from the dinner line through the comedy acts that the bands puts on.  It was worth checking out. 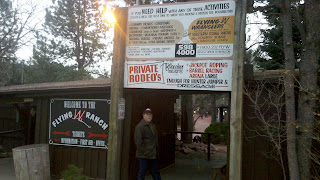 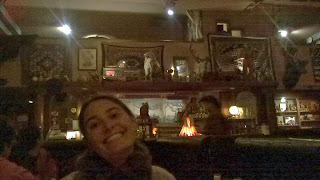 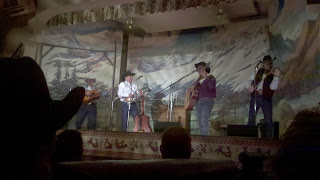 We are planning on driving up Pikes Peak today. I just called the update for the road and we can only go up 13 of the 19 miles because of snow. The highest we can go is 11,215 feet. The mtn is 14,115ft high. The winds are 12-14mph and the temp is 20 degrees today.  Should be nice! ha!  Beach weather!  Oh well, we can't be picky.  It is sunny today so I should be able to get some good pictures.  So much for riding my bike down though. :) The consensus said that was a bad idea anyways.  Apparently all of my Pikes Peak training I have been doing down in FL, won't do my any good. :)  We are taking off now. I'll update as soon as I get another chance.  Have a good Easter!
Posted by Pete Stephens at 11:08 AM