It's snowing again! Go figure.  It's the end of April, so why wouldn't there be snow falling?! There's about 2 inches on the picnic table grill that we cooked our steaks on last night. It is beautiful though. The ski slopes are already closed for the season so there is no chance of doing any skiing.

We left Pikes Peak a few days ago without being able to see it.  The road was closed up to the top of the mountain because of snow. We'll have to do it another time. We went by Florissant Fossil Monument and saw some petrified redwoods and fossils from an old lakebed where a volcano had covered it up many years ago. The fossils were of mosquitos, spiders and other types of insects and bugs. There were no dinosaur fossils.  I thought we were going to see dinosaur fossils, but apparently that is in another park. I can see mosquitos anywhere! :) haha.

We did see a prairie dog town. It was about 20ft by 20ft with many holes in the soil.  They kept popping their heads up to see what is going on and then hurrying off to another tunnel underground. Supposedly they are a big part to the eco system out here. There are a lot of animals that depend on the prairie dog to survive. Ok, that was our nature lesson for the day. We hitched our wagons and headed out towards Telluride.  We crossed the Continental Divide mountain range on the way. 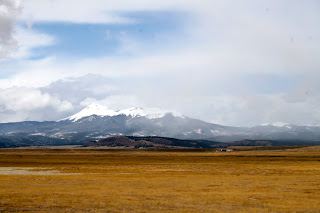 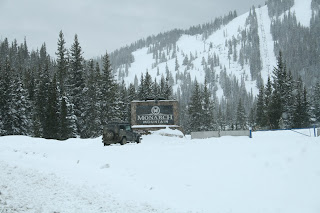 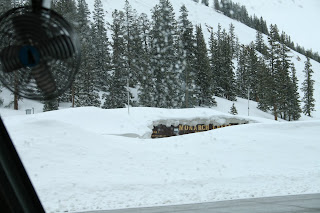 The "ole rv" did a quick 20mph up a 6%-7% grade in first gear, for 7 miles uphill. Yes it took forever and we pulled over at every pull-off to allow cars to zoom by. But it did give us time to see the sites...snow and more snow.  At the top, there was a visitor's center, but at that point the motorhome had forward momentum and you don't want to stop her when she is on the move. So, we just kept on rolling...downhill for another 7 miles. We pulled over after we got off of the mountain because Mindy got sick in the back of Joe & Jan's truck when they got to the peak. I guess the altitude got to her.

We drove to a National Park outside of Gunnison, CO on the biggest lake in CO. We camped there overnight and drove into Gunnison the next day (yesterday).  It was a cool, little town. We had some breakfast and let the ladies shop. Joe and I went into a gun store there and the gunshop owner said that it is not unusual for it to snow on July 4th. No way!  I have seen all the snow I need to see for a while, this Winter or Spring, or whatever season it is right now. Laurie picked me up a hat for my ears to stay warm, since I didn't bring mine because I didn't think we would encounter blizzards in April.  We stopped by a store with deer, bear, kangaroo, beaver, wolf, etc pelts.  It was a cool looking store.  They had every kind of mounting and hide that you could want...except cow, which is what I am looking for. After that we drove to where they brew Crested Butte beer, but they were not open until 3pm, and it was only noon.  I guess they are not early drinkers out here. 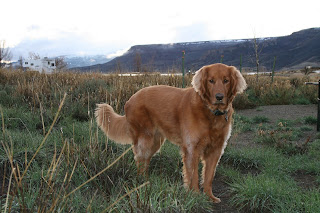 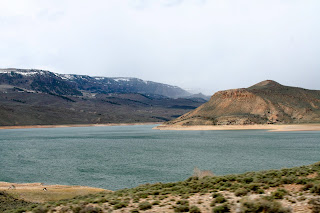 We left our campsite and drove to Black Canyon. For those of you who haven't heard of it, it is a canyon carved out by the Gunnison river, over 2 million years.  It was beautiful too.  You were able to walk out to the edge and look over, at many spots throughout the loop drive.  At one point we pulled over to take a look at the canyon and I walked down lower to another edge and Mindy followed me.  Jan thought she jumped off of the edge, chasing a butterfly or something and let out a "Oh no!" I guess she didn't see me walking around down below and thought Mindy had taken her own life. It was so funny! 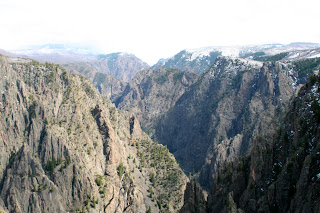 We drove the loop around the South rim of the canyon and took off.  It was snowing on and off all day.  We finally ended up finding a KOA that was closed until next week, but the owner allowed us to pull in and stay.  We are near Ouray, CO where they have hot springs to dive into. We are going to drive into Telluride today and stay another night here to be able to drive the road over to Silverton. Right now, it is probably too snowy to drive the mountain road and tomorrow is supposed to be nice weather again.  High of 60 and sunny!

I'm going to dive into a lego my eggo waffle right now. Talk to you soon!
Posted by Pete Stephens at 11:56 AM