Nice, relaxing day at the beach

Today was a very relaxing day. After tying the surfboard (Jason's longboard) in the back of the truck, and loading the lunch in the cooler, we headed down the road to Ft. Fisher to see what there is to do there. We drove past Carolina Beach (the town) and Kure Beach where some shops and putt putt places were closed up for the season. There are a lot of oceanfront homes for sale.  So, if anyone is interested, you can get a nice 4 bed 3.5 bath for a measly $1.5mm.  Let me know, and I can get the realtor's name for you. :)  We drove past the Civil War Museum because it was closed today. There are some nice bike paths to ride next to the road.  We didn't get a chance to do that today, but we made a mental note for the next time we are through here.  We stopped at the visitor center to Ft. Fisher in order to get a day permit for beach driving.  The sand is very loose, so we used 4 wheel drive the whole time we were on the beach. We did see one guy get stuck, but he was eventually able to get out, after letting some air out of his tires. 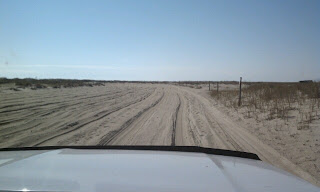 We parked half way down the beach, where we were mainly by ourselves, so we could let Holly off the leash to go swimming. She was so excited to get back in the water again.  I felt the same joy too!  I threw the ball in for Holly and walked in the water and I almost froze my toes off.  I was expecting a little warmer water, but I guess it is November and we are in NC.  The water was 61 degrees today. There were very small waves, but I decided to put my wetsuit on after getting Laurie setup with a campchair and a book. 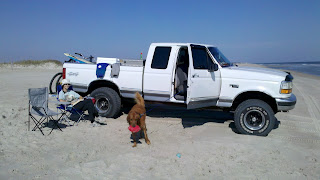 I tried to teach Holly how to surf but she was very apprehensive about the board and waves. She listened well though. I started out in very shallow water, then moved out a little deeper after she stayed on the board for a little bit.  She was scared, so she wanted to jump off every time a wave came over the board, but she managed to stay on for a ride...for about 3 seconds. 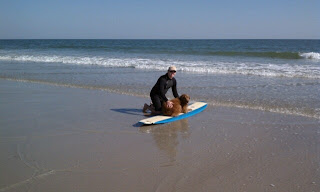 Pete's K-9 surf school didn't last too long until Holly got bored (or fed up with me picking her and putting her on the board) and ran off to find her ball. I stayed out a little longer and was able to catch a few tiny waves by laying on the board. I know some of you (most of you) will think "poor dog, I can't believe they put you through that." But, she wanted to be a mermaid...or a furmaid.... 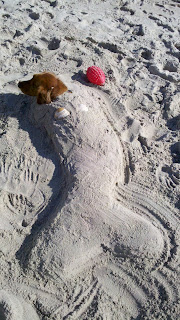 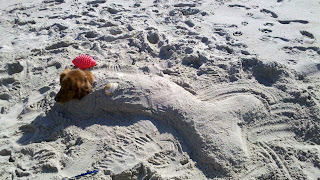 There were a few dolphins that would surface every now and then, and a shrimp boat was the pied piper for the seagulls looking to find their afternoon snack. I've never seen seagulls that are the size of turkeys! 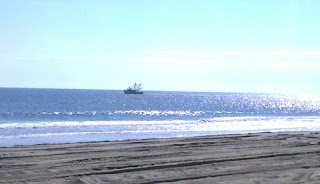 We hung out on the beach until around 3 today.  Then, we went back to the campground and made a fire.  I planned our route for tomorrow (I guess you would call it planning. I just pointed north on the map and said we are heading that way.). We ate leftovers tonight for dinner and made more s'mores. You have to take advantage of being able to make a fire so you can make s'mores.  Who knows, at our next stop, we may not be able to build a fire, and then there would be no s'mores. Ahhhhhh!!!
Our TV doesn't want to turn on now.  It's a Polaroid 27'' flatscreen, and all that comes on is the little blue light that tells us when the TV is supposed to be on. Maybe we'll find one at a Black Friday sale or look on Craigslist at our next stop. So, it's a quiet night in the motorhome because Laurie is reading her book, the dog is out like a light and I am typing, listening to Buffett.
We are heading North past Wilmington and Topsail Beach tomorrow.  Maybe we'll make it to Emerald Isle, near Morehead City and Beaufort. The plan is to make it to Cape Hatteras in the next few days, before they shut things down for the winter time.  Who knows, maybe there is a joint that is open for Thanksgiving.  Just in case there's nothing open, we bought some chicken breasts last night at the grocery store. :)
Here are some pics from today. If anyone wants to visit, let me know.  We're going to be somewhere on the coast for the next 3 weeks.  Come on up!  I can't promise that there won't be any mishaps though. :)  Good night! 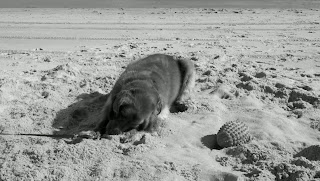 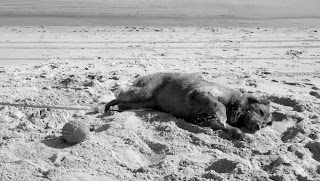 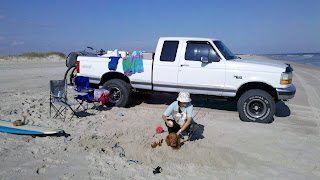 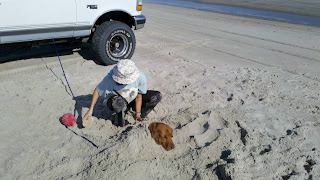 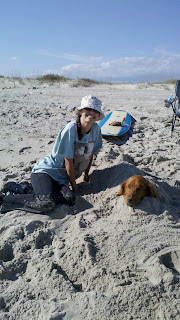 Finished Product
We hope you enjoy!
Posted by Pete Stephens at 8:42 PM