Up and blogging again!

Happy post Thanksgiving! We hope everyone had a great Thanksgiving. We missed you.  We have had a great couple of days. Wednesday, we rode our bikes around New Bern for most of the day. We don't get moving too early in the mornings. We usually end up leaving camp at 11am to start the day's activities. So, by most of the day, I mean from about noon to 4pm. 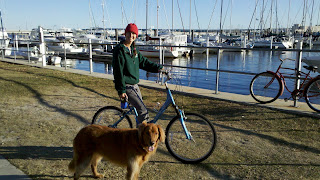 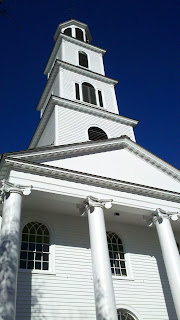 We saw a lot of historic homes, all of which were beautiful. We talked to some more nice people in town also. We ran into one guy that dives a lot. He dives down in SC and finds megalodon sharks teeth. They dive in about 30ft-60ft of water, with a clay bottom, and dig around in zero visibility to find them. He showed us some of the ones he found not too long ago. They are 1.5 million - 25 million years old. Very cool! It's funny, most of the people that we run into ask us what we are doing, what we did for work and how we are able to travel like we are. I usually tell them that we are just having fun while we can. (With a little love n luck also) I got grilled the other day from an old lady!  I was waiting on Laurie to finish shopping (nothing new) and the lady was sitting on a bench outside. She started asking all kinds of questions about our age, background info, where we were born, where I worked, etc...I left when she took out a needle and asked for a DNA sample. :) But, I'm going to come up with a great story to really knock them off their feet soon. Most people just give me this weird look like, "well, why aren't you out looking for another job?" I am, and I think I found one. Campground Host!  ha!  Rent plus utilities are paid for! Walmarts need campground hosts. Now that would be a good job for a retiree!  Zoom out in an electric wheelchair and greet the overnight campers.  Tell us where the clean restrooms and where the good restaurants are. Where to find the earlybird-special buffet. You know, all that good, interesting stuff.

We decided on Wednesday afternoon that we were going to cook for Thanksgiving. We stopped by the Food Lion and muscled our way through the people to find what we needed...Mac n Cheese, Potatoes, an already smoked turkey that was small enough for 2 and of course, the cranberry sauce (not sure why Laurie likes that one.) The checkout lines weren't bad at all.

After the grocery store, I took Holly for a bike ride (no, she didn't sit on the handlebars, she has her own bike :)) down by the river.  There are 2 nice trails here for biking. One, Laurie can ride on and one is too hilly and bumpy for her.

Thanksgiving was nice too. I went on a bike ride after breakfast and when I came back, Laurie was up and preparing lunch already! It's a challenge to cook in the motorhome kitchen because of the size, but I guess that talent has been passed down from generations, because Laurie did an excellent job. The weather was beautiful again (seems to be a theme) so we sat outside on the picnic table.

We bought Holly some turkey and pumpkin shaped cookie treats the other day at a pet store, so she was able to enjoy Thanksgiving also...
We played a few games of Triominos and Rummikube in the afternoon, then we took a bike ride to help digest the food a little, and then I laid down on the couch and took a little nap. It was a late nap at 7:30, but well needed. What Turkey Day would be complete without a nap anyways?!

Today, the weather started off sunny and 70 degrees. I took a bike ride with Holly again and by the time I got finished, the sky had clouded up and I could smell rain in the air. We took a drive over to Oriental, NC today. It's a small town with a few shops, restaurants and old houses right on the Neuse River. They call themselves the sailing capital of North Carolina...You know there are some strange people that live there!  No offense sailors. We ate at a marina and the food was great. I had a grilled flounder sandwich and Laurie had chicken fingers. We drove around a 30 mile loop across from New Bern, that includes Oriental, Pamlico, and some other tiny towns that I can't remember right now.


We drove into New Bern tonight to see the Christmas lights but a lot of people didn't have them up yet. Probably because it's only the day after Thanksgiving. Right now we are sitting out by the campfire. The rain (drizzle fo' shizzle) has stopped and it's starting to cool down. Holly keeps growling at the noises in the woods. By noises, I mean leaves falling, crickets chirping and dogs barking miles away. Wimp!  Tomorrow we're going to ride down to Beaufort (pronounced Bo-Furt) and Morehead City.  There are some Christmas parades and other festivities going on so we think it will be fun. Plus, Beaufort is supposed to be a nice town.
We hope you all have a good weekend!  Blog ya later! (C'mon, that was funny!)