Whew, this was an early morning.  4:45am came quick, but I was up a little earlier than that because I was dreaming about flying…I don’t remember what the dream was about though.  Anyways, we all met down in the lobby for coffee and tea and to organize the day. It was Mo's birthday today and I promised her that we would see an elephant and leopard...I think I promised a leopard, but it may have been a lion. We had breakfast boxes that the hotel made for us to take on the safari, with plenty of food in them. Marg, Matt, Mo, Mrs. Heal, Laurie and I would be going on today’s safari.  We dressed warmly because we were told that it would be a chilly morning, but would warm up in the afternoon.  Chilly didn’t describe how cold it would be once we got going though.  Our guide met us in the lobby.  His name was John, and he had the look of a rugged bush man, with his leather jacket with holes and safari boots.  He was probably 40 years old or so.  The ladies were happy to have such a guide on this full day of safar-ing.  J
We boarded the safari vehicle, and thank God John had thick blankets for us because the weather was probably 40 degrees and it was an open air safari vehicle. We HAD to stop by the coffee shop down the road to grab a cup of coffee to warm us up.  After a 45 minutes stop at the gate of Kruger National Park to pay our gate fees, we were on our way.   We had a couple of goals for the day. #1 (this goal had multiple items): spot the big 5 (elephant, lion, cape buffalo, leopard and rhino). #2: Have a blast.

Almost immediately after entering the park, we spotted our first zebra of the day.

John wanted to take us to a couple of places where he had seen some lions and leopards not too long before we arrived.  He said early morning was a good time to see the cats sitting on top of rocks looking for their breakfast.  We passed some deer/mountain goat looking animals that were hanging out on the rocks.

We drove around the other side of these rocks and spotted some monkeys and a Kudu. 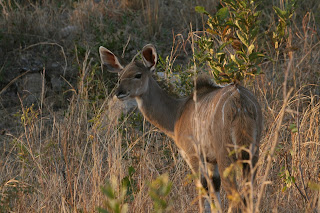 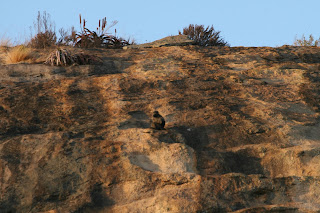 We passed an Eagle, Impala, more Eland, monkeys and more within the first hour of being in the park.  We almost cruised right pass these Giraffes that were on the side of the road, eating their breakfast. 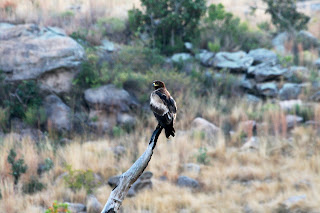 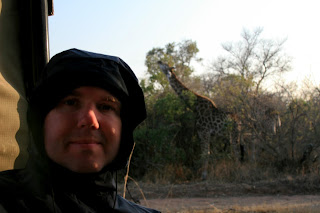 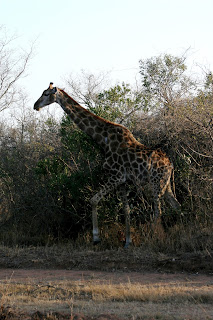 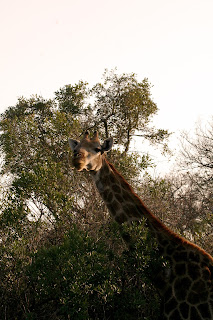 Continuing on with our journey, we came across this rhino that was eating breakfast.  He let us get some great pictures.  He was posing for us. :) 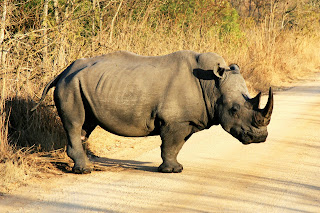 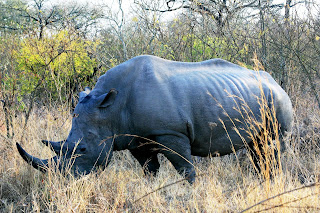 Rhinos are very large animals.  The wrinkles down their back are actually muscles, but they look like rib bones.  These rhinos eat grass and some eat tree leaves.  They are pretty docile creatures, which makes them easy targets for poachers.  Poachers will kill them just to cut off their front horn and sell it to the Indians.  Indians believe that the horns are medicinal and can cure many things...although science has proven otherwise.  Any poachers caught in Kruger National Park are shot and killed because poaching has become a serious problem.

Driving into the park a little further, we continually passed Eland, Impala, Zebra and then came across this herd of Elephants. 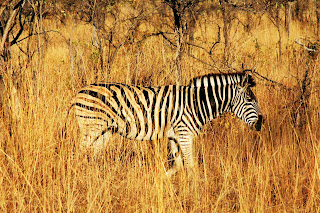 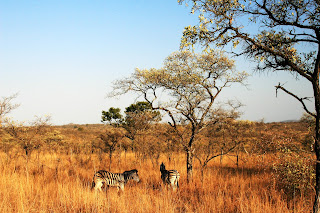 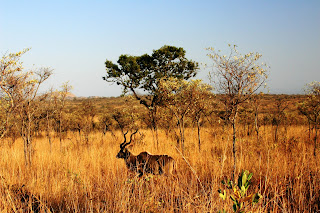 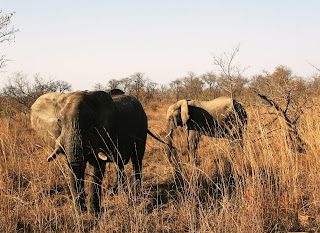 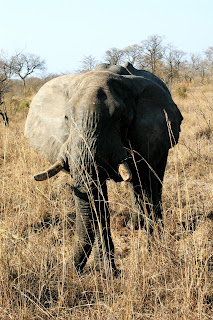 We continued our quest of spotting a lion and leopard throughout the morning. We drove down dirt roads, far away from the paved paths that most tourists stick to, and one of the dirt roads lead us to this watering hole. You can imagine how thirsty animals will get out here in Africa. We saw more hippo, cape buffalo, thirsty impala that came running out of the brush, crocodile and many more animals that came to sip a little fresh, African, muddy water. 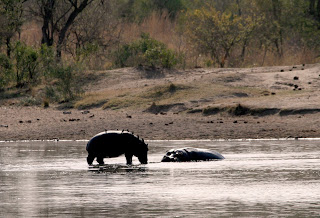 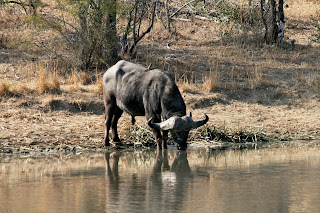 A quick stop for breakfast and chat with Don, our tour guide, (he spotted a leopard this morning), and we were on our way again.  We have been searching for 4 hours for a leopard and lion, and still no sign...although every once and while our safari guide will stop and point to some tracks in the dirt and tell us it was fresh leopard or lion tracks, and that they crossed our area this morning at approximately 8:39am.  I must admit, he had us going when we were all still asleep, first thing in the morning. But, by the 4th time he told us what type of animal and what time they crossed the road, by the paw prints they left the sand, we all started to catch on to his game. I would do the same thing if I were a safari guide though.  But, I would make it a little more unbelievable.  Ie: "These prints right here folks are unicorn prints. You can see where he started running and then took off into the sky about 22 minutes ago..."  Hahah!

Our time frame was quickly diminishing for seeing a leopard or lion, as we only had a few hours left of our day out on the safari. We continued to see so many animals on our drive.

After we stopped for lunch and had monkeys trying to drive the safari vehicle away, John (our guide) heard the CB radio start chattering. When safari guides spot something to talk about in the park, they announce what it is and where it is located within the park. Of course, we can't understand the lingo that the guides use because I think they make up words for lions, leopards and other animals. But our guide did. All I heard was , bula, bula, 100 meters, bula, bula.

We approached a traffic jam in the road, full of vehicles with people looking towards the river valley. Our guide tells us that there are a couple of lions down by the river. You can imagine our excitement after searching all day for these animals. We felt like school children on ice cream day.  The lions were sitting by some bushes a few hundred feet away, so it was difficult to get a good picture of them.  The female lion was a little easier to get pictures of than the male lion. Either way, we were so excited to finally see such an elusive creature, at least on this day. 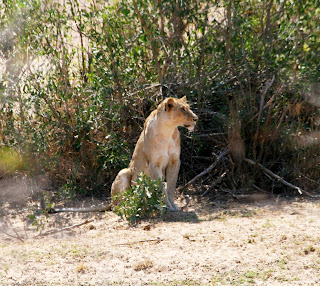 We barely made it out of the traffic jam without a scratch on the vehicle, or without John (our guide) losing his temper.  There was a sense of relief in the air, that we finally got to see a lion in the wild. We needed that excitement to get our blood flowing and wake us up a little bit. The 4:45am wake up call had us all drifting off into lala land.

An hour and half of our safari to go, and we only had one more animal out of the "Big 5" to spot. John wanted to take us to a good place to spot a leopard in the afternoon, so we hurried to a dirt road that lead us by a river valley with a lot of trees and shade where leopards could stay cool.  We saw more elephants, impala, kudu and we also spotted a wildebeest. We were the only group to spot a wildebeest on this day.  It looked like a mythical creature.  I halfway expected it to have a human face with a horse body, just from hearing the name of it.

We searched and searched until our eyes were going cross-eyed from looking into the bushes while driving. We almost got into a tight spot with a herd of elephants that we happened upon. The baby started making a trumpeting sound with its trunk because it was misplaced from its mother. The herd started rustling around in the bushes and we barely escaped without being turned over by mama elephant. Okay, that's a little far fetched, but the baby was upset. :)  I couldn't get a good picture of the baby because it was hiding behind its mother when the dust settled. 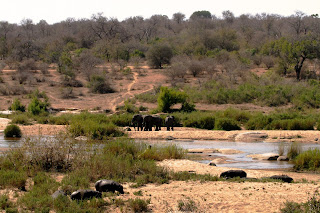 We made it back to the paved road and our hopes of seeing a leopard today had disappeared. With the exit gate quickly approaching, we knew today was not our day for spotting the "Big 5." That's okay though. We were all in good spirits because we saw so many animals today.  The way that you can get so close to these wild, HUGE, animals is amazing.  We could not have asked for a more beautiful day to take a safari in Kruger National Park.

After a couple of pictures at the exit of all of us, we headed back to the hotel to shower and relax. It was a long day and we were all tired. 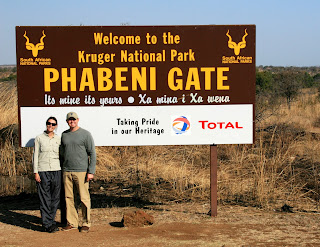 We ate another wonderful dinner at the hotel that night, then Don, our tour guide, gave a lesson in astronomy when it was dark enough to see the stars. He taught us how to use the Southern Cross to find South in the sky, and also pointed out Sagittarius and a few other constellations throughout the stars. After the astronomy lesson, we went back to the dinner table so a few of our friends could eat and we could sign happy birthday to Mo before everyone went to bed.  The hotel staff brought out a cake that Mrs. Healy and Don arranged, and the entire room sang happy birthday. I think Mo was surprised! We had some excellent chocolate cake and celebrated Mo being 25 years old again. :)

What a day! And to think, we still had more adventures ahead of us on this trip.