Our wakeup call came at 5:15am, which is quickly becoming a norm on this trip.  After grabbing a quick cup of coffee and a box full of breakfast snacks, we boarded the bus for our first safari.  The Africans must think we eat a lot because our snack boxes weighed about 10 lbs and they were full of chips, lollipops, apple, banana, muffin, chocolate bar, juice, water, a cucumber sandwich and there were probably more items at the bottom but I couldn’t get through all of the other items to see what was at the bottom.  I only ended up eating about 3 things out of the box, then gave the rest to the staff at the safari park.  We had 3 safari vehicles waiting on us when we arrived at the park.  This was going to be a 3 hour safari, just to get our feet wet for Friday’s adventure.

We left the parking area with our safari guide and started out to the park.  The trails throughout the park lead you around the perimeter and through the middle of the park so you can get good views of the many different animals. The first animal we saw was a Cape buffalo.  He was a lone wolf, all by himself, grazing on grass and living out the rest of his life in the park.  He used to be a pack leader, then another buffalo took over and forced this old guy into retirement.  He didn’t look like he was unhappy about the retirement though. 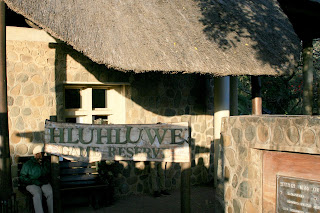 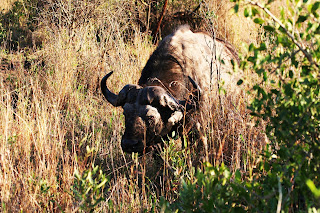 After the buffalo, we saw a herd of elephants running across the road up ahead.  I got a few shots of them with the camera, then one of them started flapping its ears and making an elephant sound because it was afraid of us.  Elephants give warning signs when they are uneasy with their surroundings.  Theirs ears start to move in and out and they start making a sound with their snout.  It’s time to move on when you hear that.  Elephants can weigh up to 2 tons and they can move vehicles with their tusks.  Needless to say, we moved on. 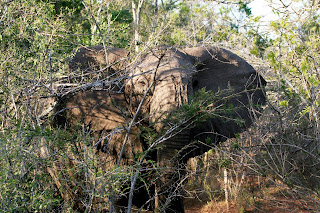 Throughout the park, we spotted rhinos, baboons, zebra, giraffes, various sorts of birds, deer like creatures (I can never remember the name of these because we keep calling them deer), kudu and a few other animals which I know I am forgetting. 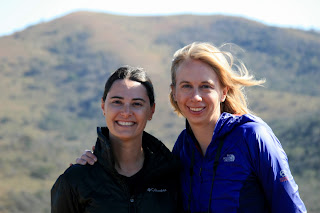 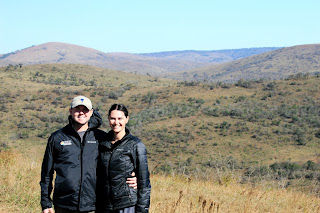 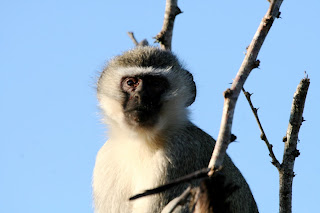 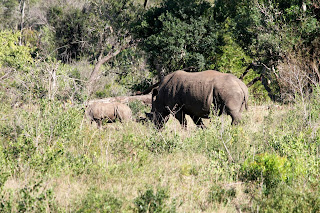 3 hours went very quickly when we are spotting so many animals and having a great time.  The weather was sunny and perfect again and we couldn’t have asked for a better morning to start our Wednesday off with.  It was time to depart for a bus ride into Swaziland, the 2nd smallest country in Africa.

After a 2 hour bus ride through the mountains and farmland, we made it to Swaziland.  We got out of the bus and walked up to a counter at one of the buildings on the border and got a South African departure stamp.  Then, we walked over the border into Swaziland and got our passports stamped with an entry stamp.  We got back on the bus and continued on our route.  We drove past villages of authentic Zulu (original African natives) huts, women selling grilled corn on the cob and some towns that had some very nice tile roofed houses.  Many South Africans go to Swaziland to retire because you can live relatively well for a smaller amount of money.  Swaziland’s people have an AIDS epidemic though.  People between the ages of 35-45 have a 56% HIV positive rate.  From ages 25-34 they have a 45% HIV positive rate and ages 18-24 have a 30% positive rate.  When we crossed the border into Swaziland there were boxes of condoms in the office.  There is help available for those that want it, but many people are mad, or they are not allowed to speak of their condition when they are HIV positive, so they pass it on to others.  Poverty, lack of education and contracting it as child from their mother are the main causes of HIV.  It is very sad to hear about countries like this that have a lot of potential to be something very good, and not living up to it.  There are people trying to make it better though, and one of our tours on Thursday will show us that.

With a stop by the candle factory on the way, we arrived at our hotel, casino, at about 5:30pm.  Yes, I was excited about staying at a casino for a night.  I finally get to have a little fun because I have been very patient waiting out the shopping stops that we continue to stop at.  It seems there are only things to buy that are directed towards women.  I know why that is, it just doesn’t seem right though. J  I don’t see any guitars or things that I would be interested in purchasing from Africa. That’s okay, my big night was here.

Bag porters unloaded our suitcases and took them to our rooms.  We never have to handle our suitcases for any of the stays with this tour.  It’s awesome!  We ate dinner at a place across from the hotel called, Mugg & Bean. It’s a coffee shop/restaurant that was located in a mall. It’s very odd to see malls and nice grocery stores out in the middle of nowhere Swaziland.  The malls are well kept and the restaurants are very clean and accommodating as well.

We ate with Mo, Mrs. Healy, Matt, Marg and our Aussie friends Karen and Ian stopped by for some dessert and coffee.  I forget if I have mentioned this yet, but everyone on this tour is very nice and laid back.  There is not one trouble maker or difficult person.  I could travel with this group again anytime.  We closed down the Mugg & Bean that night…at 8:15pm and dodged traffic on our way across the street to the hotel.  We dodged traffic, not because it was busy, but we because were crossing in a roundabout, with traffic that drives on the opposite side of the road from the US. Plus, KFC was bringing in the cars pretty steadily and we were crossing in front of the KFC as well.  There are KFC’s everywhere in South Africa!

I was determined to play some blackjack in the casino that night, so we all wondered through the small casino doors, got wanded for guns or knives or whatever they use he wand for, then ended up at the table area.  Matt and I were the only ones that were gambling that night, so Matt put down some money on roulette and it didn’t turn out like we had hoped.  I sat down at a 3 card poker table for a few hands until another blackjack table opened up.  It was pretty busy in the casino that night, and smoky as well.  Everyone huddled up behind Matt and myself as we played a few hands of blackjack. It was mentally challenging because I bought in with 300 Rand (South African currency), which ends up being about $25 US dollars. The minimum bet was 25 Rand and I kept thinking to myself that I was betting $25. I ended up sticking it out longer than Matt and was winning some and losing some, until Laurie went off to the room.  I started winning almost every hand at that point.  Mo, Matt and Mrs. Healy left after a few more minutes because of the smoke and I really started winning. I would win 3 and lose 1 and it was a roller coaster.  My adrenaline was flowing because I had a nice stack of chips in front of me and the thought that I was using Rand to bet, was escaping me right up until I cashed out.  On the last hand I bet 75 rand and I got a blackjack on it.  It was getting late…9pm and I was getting tired from a long day, so I decided to cash out.  I won 275 rand!  No, not 275 grand. I did the math on my winnings and it totaled up to a whopping $22.  Whew, I could really enjoy playing in Swaziland’s casino again.  One night at those tables and I could win $50 probably.  That’s okay, I still came away the big winner (not wiener) and was the talk of breakfast the next day.  Everyone else had gone to bed early and didn’t get a chance to play, except Ian and I think he won a little money on slot machines.

It was another wonderful day of travel for us.  Our first official safari was exciting, with many animal sightings that we had never seen before. Plus, the mountain views, a new country that we had never been in and a winning night at the casino.  I would say that it was a pretty successful day.  Good night!
Posted by Pete Stephens at 4:27 PM