Robben Island...we thought we were going...

Our Monday morning started off Sunny and a little breezy, and that was the end of the sun for the rest of the day.  I found a good bakery that was next door to the hotel, so instead of having breakfast at the hotel, I walked over to grab a couple of pastries.  The hotel breakfast was very good, but after 4 days, it's tough to eat omelets anymore.  I walked back to the hotel and worked on a few emails and then woke Laurie up.  She asked me what the weather was like and I told her it was sunny, a bit breezy but very nice.  Whoops, that was a mistake.  It turned out to be windy, cloudy and cold.  Cape town people say the weather changes quickly and it's very unpredictable. Now I know what they meant.

We bought tickets to go over to Robben Island where the political prisoners of south Africa were held during Apartheid. It is where Nelson Mandela was held, but many other captives that were fighting for freedom were held there as well.  Getting over to the island meant taking a ferry, and we had heard that when the weather is bad, they cancel the trip. It was tough getting tickets to go over to the island because it was so popular, but we managed to buy them online Friday, when we got to Cape Town, for the Monday ferry at 1pm.  We grabbed lunch over at the waterfront in hopes of catching the ferry after we were finished.  When we got to the ferry building, we found out that the ferry was canceled. bummer!  We did get a refund, but this was going to be one of the highlights of our trip, and I know we were all looking forward to going.  Our friends that we met on this trip, Marg and Matt, worked so hard getting their ferry tickets, and I was even more bummed for them.

We made the best of a canceled ferry trip day though.  We took a walk by the ocean, even though it was windy and cold. This was our last day in Cape Town and we were going to see all that we could see of the city before we left on Tuesday.  Our walk took us along the shore, past the world cup stadium that Cape Town built in 2010, over to Seaside where there was a red and white striped lighthouse. In front of the lighthouse, there was a little greenway park where we got to pet a couple of dogs that were out playing in the grass. 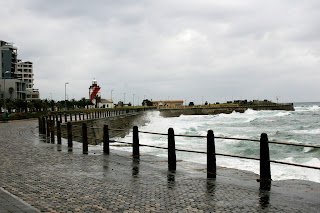 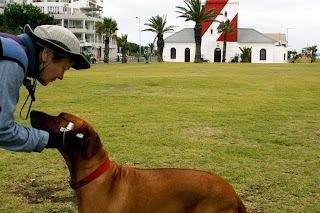 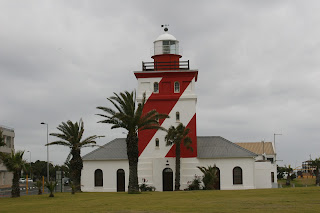 After we got our dog fix, we walked through a beautiful park on the way back to the hotel.  The park had many ducks, ponds and plenty of running trails. Side note: there are many places to run and exercise in Cape Town.  They even have exercise parks along the water where people can go and work out right next to the ocean.  I would love to have that in Plant City. hahaha!  BTW, we have no ocean or reason to put one of those workout parks in Plant City where we live. It would barely get used, and I don't think they should do it just for my sake. hahah! We ended up back at the hotel at 4:30 and were getting a little hungry.  It seems like all we did on this trip so far was eat, walk and get a little sleep.  We ate at Balducci, a restaurant on the waterfront.  I had sushi and it was wonderful.  Mrs. Healy had a burger without the bun and Laurie and Mo had a somewhat tasteless pizza that the taxi driver ended up with the leftovers as his tip on the way home. Just kidding. I tipped him, but he did end up with an entire pizza of leftovers. For such a windy, misty, cloudy day, it ended up being a fun day all around.

It is Wednesday night and we are in Swaziland, another country in Africa. We saw many hippos and some wonderful scenery yesterday and took our first safari this morning. :)  I will try and post some pictures tomorrow.  good night!
Posted by Pete Stephens at 1:13 AM