Another early wake-up call this morning. Today we are going to Zimbabwe to see Victoria Falls.  We are flying from Johannesburg to Vic Falls airport. After breakfast, we say goodbye to our friends that are going back to reality and their daily lives. Those of us that are staying are sad for our friends, but glad that we are staying...and thinking about how many days it will be before we are in their shoes.

Johannesburg airport is humongous! I thought Atlanta airport was big.  It's nothing compared to Jo-Burg. After walking our 10,000 steps for the day by the time we get to the gate, we are all worn out and ready for a nap. It's a 2 hour plane ride, so that might be possible.  We are flying back through Jo-Burg so this will be the last place that we would be able to buy souvenirs if we wanted to.

Don, our tour guide, warned us before we got to Zimbabwe that the Visa line would be about an hour to get through, but to just be patient.  We had no idea what kind of wait we were in for...

The flight was pretty uneventful and we landed safely. We got off the plane in Zimbabwe and the weather was beautiful. It was sunny and about 80 degrees.

Our group was towards the back of the plane, so we got into the back of the line that lead out of the building and down the wall, then doubled back in front of the building.  It was basically like a snake line with about 150 people in it.  We thought it was moving fairly quickly and had a good attitude about it...well, 2 hours later we were FINALLY in Zimbabwe with our Visa and passport stamp. getting a Visa consisted of paying a man at a desk $35 each person to get in, getting a hand written receipt, then handing our passport to another person at the same desk and getting a hand written Visa and passport stamp.  The whole process for Laurie and I took about 5 minutes.  So you can imagine how long we stood in line after the 737 that we flew in was a full flight.  We could have complained, but we were in another country that has their own way of doing things.

After we were through customs, we were greeted by the bus driver and luggage porters that carted our luggage to the bus.  There was also a group of singers in the parking lot that were serenading us with a capella African music...The Lion Sleeps Tonight. (by the end of this trip we'll have heard that song 10 times. It seems like the singers know what the tourists like to hear...hmmm...entrepreneurs) We took the bus to our hotel that was only about 10 minutes away from the airport.  The hotel was located within the Zambezi National Park. The property was big, with a nicely thatched roof guard shack, warthogs grazing in the green grass, birds chirping and a huge thatched roof building for the hotel.  This was the place to stay in Victoria Falls, apparently.


After dropping our bags in the our rooms and getting right back on the bus, we were off for a sunset booze cruise on the Zambezi River. We boarded the two story boat and our group took the top platform. There were tables and chairs setup for us to relax at while we cruised the river and were offered spirits and appetizers.  Our group was fun. We were ready to relax after a long day of travel and standing in line at the customs counter.  We laughed and joked, and saw a lot of hippo and crocodiles again.  We saw the spray from Victoria Falls off in the distance and got an idea of just how big they are. 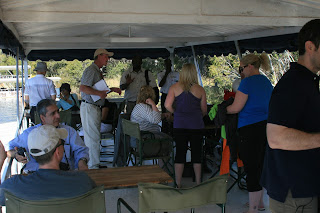 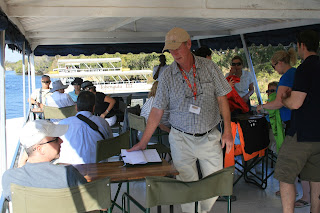 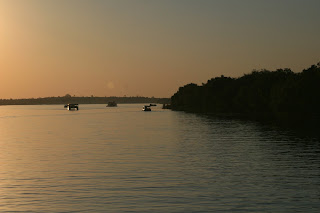 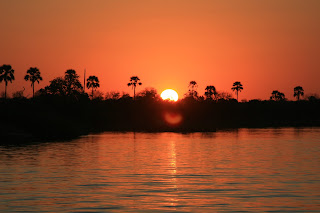 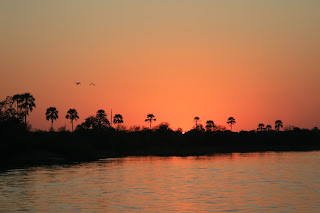 After a magnificent sunset, we boarded the bus and headed back to the hotel. Don told us of a restaurant called Boma, located on the grounds of the hotel property, that offered a unique African dining experience. We were very interested in checking it out because Don also told us that Boma served different kinds of meat...warthog, kudu and more.  Sweet!

We freshened up a little before dinner, then made our way over to Boma.  We made reservations for 18, so our table was long enough to seat our entire group.  We got to the door of the restaurant (it was an open air restaurant with a thatched roof) and were handed a colorful wrap to wear around our shoulders.  We were in for an authentic African dining experience...

We walked into the buffett area where our table was and walked right past a lamb spit that was roasting on a fire. There was a barbeque aroma in the air.  the place looked like an African village on the inside.  an African village full of food.  If this was authentic African dining, I am not sure how Africans stay so skinny.  We ate and ate and ate and ate....various kinds of meat, vegetables, salads, desserts and everything you could think of.  Here we are, almost all the way through our trip and we haven't stopped eating since we landed 2 weeks ago.

When we were slowing our chompers down a little, we heard drumming starting to take place. All of sudden 4 people came out of nowhere and started jumping and dancing around with some cool drums and music playing.

The dancing and music was wonderful. The musicians were very talented and all of the people had great rhythm. That girl can move! 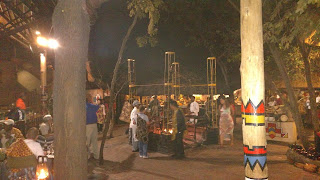 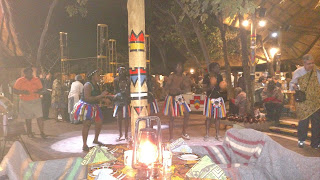 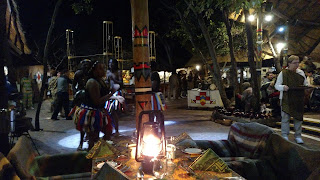 After some more dancing, they performers took a break.  Then, some other guys started handing out drums to all of the restaurant patrons. Of course that's when things got very loud because we all started behaving like 3 year olds who have been given a new drum set for Christmas. Ian and I were getting dirty looks from people around us because our drum beating was very loud and a little obnoxious. They just didn't understand the sound of good drumming.  After all of the patrons had a drum in their hand, we were given drumming lessons by the main drummer.  The 4 or 5 drumming performers kept a cool African beat, while the restaurant patrons tried to keep a cool African beat.  After losing a drumming contest against the other half of the restaurant, the drum crew asked everyone to come down to the middle of the restaurant for a dancing circle.  We all danced and jumped around to some drumming and then mo got pulled into the middle of the circle to dance and run around.  She did great! Then, I got chosen to go into the middle of the circle and dance and I ran around the circle for a second and then gave a mediocre Michael Jackson spin around move and chose someone else to join the circle.  It was lot of fun and energy and we all needed that to work off our buffet feast calories. 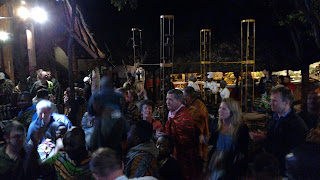 After all of the excitement, we headed back to the hotel. Before going to our room,  Laurie and I stopped to look out on the watering hole to see if we could spot any animals coming for a late night drink. Just as Laurie was about to walk away because we didn't see anything, I spotted something coming out of the darkness.  It was a herd of elephants walking down for a drink.  There were about 5 of them! It was so cool to be able to sit on the balcony of the hotel bar area and watch wild elephants from about 2 football fields away.  What a great first day in Zimbabwe.  I can't wait to see Victoria Falls early in the morning.
Posted by Pete Stephens at 11:29 PM