Today was going to be a long day of riding on the bus.  We had to get back to Johannesburg for more tours tomorrow. Our route today would take us to the highest part of our trip, over a mountain range and through the forests, down to the city.  It was supposed to be a beautiful ride though.

Our first stop was at a scenic place called God's Window. You walk up to a lookout so you can see over a mountain range. The weather was perfect for taking in some scenery today. 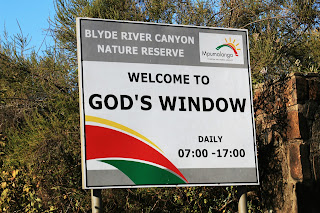 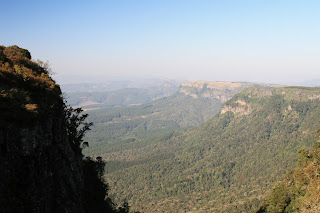 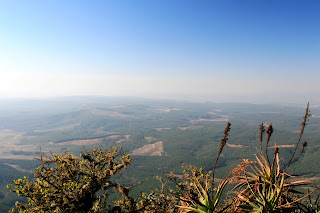 We drove another 20 minutes through the mountains to our next scenic spot.  It was called Pot Holes. I thought to myself, "Why would we need to see pot holes in the road? and why would they make them a big deal? We see them all the time in the US." When we arrived at the "Pot Holes" they weren't really pot hole in the road, they were pot holes in the rocks, where water cut its way through the rock over the years. 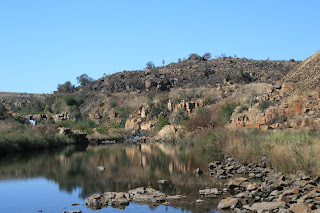 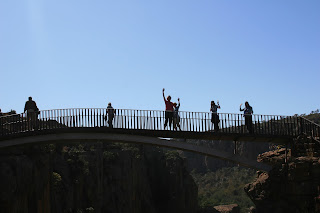 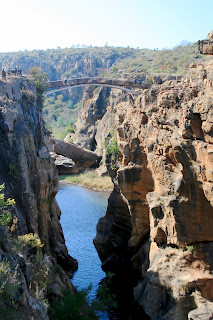 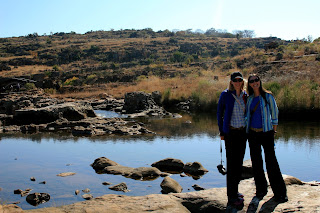 We had a lot of fun at the pot holes, but it was time to venture on.  our next stop was to see more mountain scenery at the 3 Rondavels. Meaning, a circular building with a thatched conical roof. they were rock formations from erosion.  They were very pretty though.  We took an unofficial tour group picture here as well. 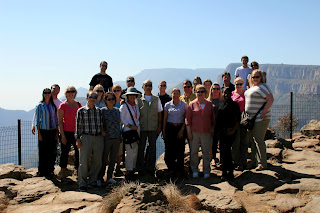 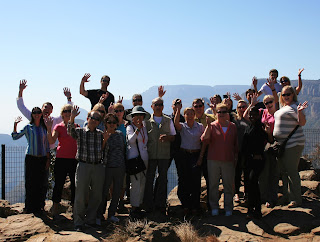 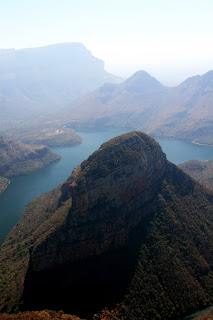 We drove on, continuing our way down to Johannesburg.  We passed the highest point on our trip through the mountains.  It was approximately 6800 ft, according to one of our group member's watch. We passed countrysides with trout farms on them, little towns with dutch houses and then we drove through a small town called Dullstrom.  We stopped for lunch there.  It was a quaint Dutch town that tourists travel into for weekend vacations.  Laurie and I had lunch at Harrie's Pancakes, which actually were crepes.  I had a chicken curry crepe and Laurie had a banana nutella crepe. They were excellent! We sat outside where it was about 70 degrees and watch the people go by.  We were limited on time, so right after we finished our lunch, we went shopping.  There were little shops with leather goods, African crafts, kids items, boutiques and more.  We bought a puzzle at one of the stores.  We made it halfway up the street, then had to run back to the bus because it was time to leave.  We didn't get to ALL of the shops like Laurie would have wanted, but hey, we saved some money and made it back on the bus.  We'll save the shops for another trip. :)

The rest of our bus ride to Johannesburg was uneventful. Don (our tour guide) gave us some more great history lessons about South Africa as we rode through more farming areas and into the city.  We stopped at this Mandela memorial and Union Buildings right outside of Johannesburg.

We drove through the main drag and saw embassy buildings from around the world.  We saw large and small houses.  the house had block walls with razor wire on the tops of them.  The city had a bad crime rate at one time.

We made it to our hotel after dark. The area were our hotel was located was surrounded by a block wall and a guard gate that we had to go through. It was an upscale area with restaurants, a mall and lots of shops.  Don told us about some good restaurants and happened to mention a steakhouse. Laurie and Mo honed in on the steakhouse and before we knew it, we were headed to dinner. Matt, Laurie, Mo and I had an excellent meal! We each had filets, veggies and a salad for about $30 each. The pricing was awesome...so was the food.  After dinner we were all pretty tired from a long bus ride, so dancing in he hotel was out of the question.
Posted by Pete Stephens at 10:25 PM