Our wakeup call came at 6am today. It was going to be a long day, but fun filled. We left windy, cloudy and cold Cape Town and flew to sunny and clear skies Durban, a city on the northeast side of South Africa. Durban has about 3 million people in it so it is a sizable city with modern amenities. The flight to Durban was uneventful and it seemed like we were flying over the southwest of the US, with mainly dry river valleys and  mountains. After landing, we boarded a bus for a long drive to the St. Lucia estuary, a world heritage site where we could see hippos and possibly some crocodiles in their habitat. On the way, our tour guide gave us some history about the area, but I can't seem to remember any relevant facts right now. I get very tired when Don starts talking about history, so I end up napping during his talks. Although supposedly we are going to have a history test at the end of the trip. I know what grade I will be getting. :)

The bus drive took us through the countryside with mountains and plenty of farms full of sugarcane. We finally arrived at the estuary at 3pm. We all needed a little excitement to wake us up. The area looked similar to Homestead, near Miami, just a little smaller. It was near the Indian Ocean and pretty low to sea level. Our guide told us that hippos roam the streets at night looking for freshwater to drink. The people in the town don't really go out at night because of this.

Hippos aren't very ferocious in nature but they get angry and defensive when they are scared. Weighing 2 tons, hippos can run about 25 mph on land. I don't even think the Kenyans can run that fast! Hippos kill more people in South Africa than any other animal. Their teeth are large and their jaws have very powerful chomping power.

We boarded a large pontoon boat that had an upper and lower deck for sightseeing.  Our group went up top because the weather was sunny and breezy, and the views seemed a little better from up there.The water was muddy and shallow in the estuary. Not very inviting for taking a swim.  We left the dock and almost immediately saw a sunbathing crocodile.  It was about 5 feet long and it's color was a light brown with some darker flakes mixed in. 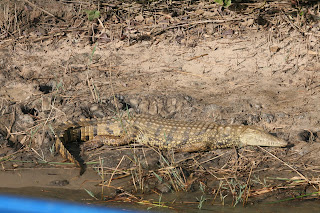 After the croc excitement we drove about a minute up the river and spotted some hippos in the water.  Our first hippo sighting!  There were a few hippos cooling down in the water. They would keep their heads about water like a gator would, then go under for about 30 seconds before rising to the surface again. Hippos can hold their breath for 6 minutes. I took a ton of pictures of pods of hippos sleeping on the riverbanks, fisheagles looking for dinner and hungry hippos munching on some trees leaves. Hippos are funny, round creatures with huge mouths. The boat ride took about 2 hours and as the sun started going down the hippos that were sleeping on the riverbanks started waking up and stirring around. They wake up in the evening to eat and drink. Far off in the distance Laurie spotted an animal that looked like a large antelope.  We arrived  back at the dock after seeing a lot of hippos and a couple of crocs, and hurried onto the bus for a quick trip to see the Indian Ocean. 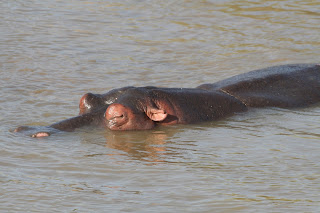 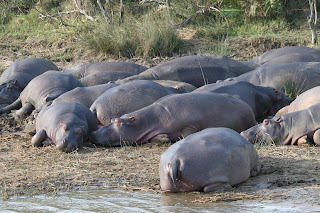 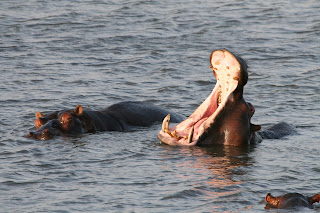 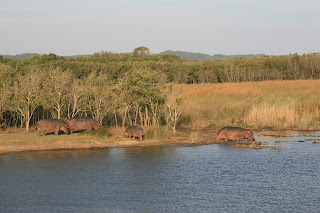 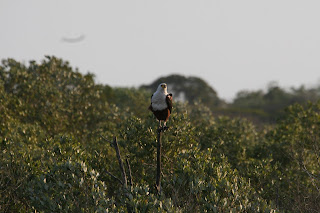 We drove past the hippo crossing sign and down to the beach just before dark so we could all say that we got to touch and see the Indian Ocean. The beach was very beautiful and the water and waves were even prettier. The water was in the 70's, unlike the 50 degrees Atlantic Ocean down in Cape Town. The currents bring warmer water from north Africa down to the south in the Indian Ocean. As the sun was setting behind us, our tour group was taking pictures and enjoying some laughs on the beach, wrapping up a long travel day. As we were walking back to the bus to leave we passed a group of mongoose that were playing in the sand dunes. I thought they were ferrets but was corrected by our tour guide.

We departed the beach and drove to the hotel where dinner was waiting for us. Dinner that night was a buffet of pork, beef, a nice assortment of salads and vegetables.  Of course dessert was available and it was chocolate cake and malva, an authentic South African dessert. We had an excellent conversation with our new friends Matt and Marg at dinner about how Mo makes her co-workers cry. Then we all went off to bed because the next day's wakeup call was coming at 6:15.

Posted by Pete Stephens at 4:26 PM