We were able to sleep in this morning with our wakeup call coming at 7:30. It was nice to be able to sleep past 6:15 again. Our breakfast was excellent and coffee was great. The plan today was to visit an school that Gate 1 donates to.

The person that started the school traveled with us on the bus from the hotel to the school. He spoke of the HIV problems in Swaziland, and his goals for the school. He is involved in politics in the country and trying to bring more awareness to the orphan problems.

We stopped by a grocery store on the way to the school to buy canned goods, maize, vegetables and other groceries for the kids to eat. We loaded up the back of the bus with all of our goods. People brought paper, pens, stickers and other school supplies from home to give to the teachers for the kids. The kids greeted us when we were getting off the bus, with huge smiles. We unloaded all of the goods and gave them to the teachers, then we walked into one of the block buildings where the kids would sing us songs. They sang songs with loud voices and smiles, and then some of our group handed out stickers and pencils to the kids. Mo handed out stickers to the kids and was almost pushed over from all of them wanting to get the stickers. It was so funny. At one point Mo was kneeling and you could barely see her blond hair in the middle of all of the kids. Laurie had kids crawling all over her and so did others from our group. Some people were crying from seeing the kids and how excited they were to see us. The kids wanted affection because they probably didn't get too much of it. Time was pressing so we had to get going. It was sad to say goodbye. 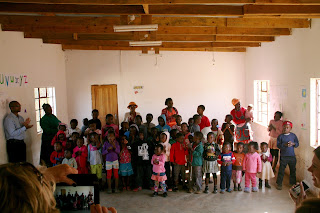 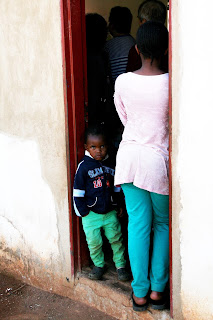 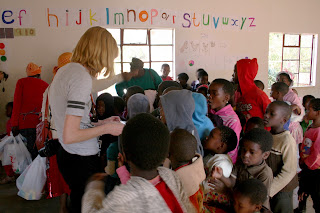 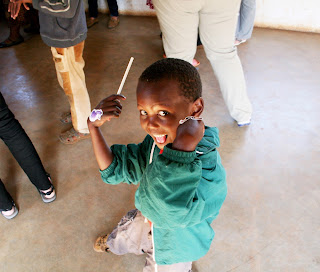 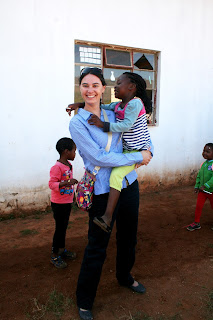 After visiting the school, we drove through some beautiful farming country. Bluegum tree farms are big in these parts. They use these trees for paper processing. We stopped at a glass blowing factory along the way so we could pick up more crafts and continued on our journey back into South Africa. We left Swaziland and drove another hour or so to lunch. After lunch and traveling another 3 hours we made it to our hotel outside of Kruger National Park, where we would be going on a safari tomorrow.  We passes banana farms, mango farms, avocado farms, orange farms, etc...farms, farms, farms. At least we know the fruits and vegetables are good and fresh.

The hotel was pretty. It had large bougainvillaea trees blooming in the gardens around the property, and the roof of the hotel was made of straw about 5 inches thick. It looked very authentic. We unpacked our bags and then walked around the hotel just to see what other amenities it had. The playground was fun because it had a trampoline that we all took turns on. I busted out some ninja kicks and a few front flips, and Laurie and Mo practiced their gymnastics on the trampoline. 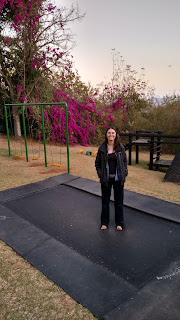 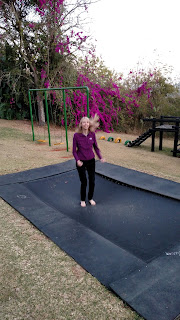 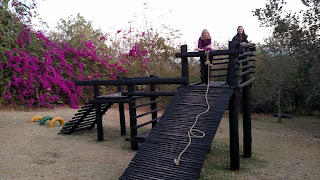 After being out of breath from just jumping about 3 minutes, we walked up to the pool and bar area. The pool was inviting until I felt it....cold...:( Laurie brought out some playing cards and her, Mo, Mrs. Healy, Matt and I played rummy until it was dinnertime.  Dinner was a buffet style again and man was it good. I am starting to believe that this is the way the Africa's eat. Authentic buffet style food with roast beef, chicken,  vegetables, fruit salad, etc...and plenty of dessert. Hunger is not a word that would be said by anyone on this trip. The meals have been fabulous.  We had a 4:45 wakeup call in the morning so after dinner everyone went to their rooms for sleep. Tomorrow is supposed to be the best safari area for spotting the "big 5," lions, cape buffalo, leopards, elephants and rhinos. We can't wait!!

Posted by Pete Stephens at 4:34 PM